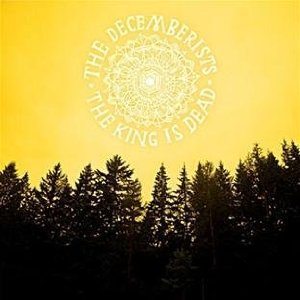 For the best part of the last decade The Decemberists have been making albums of ever increasing ambition, scope and complexity, reaching apogee in 2009’s ‘Hazards Of Love’, a full blown concept album with narrative arc and characterisation. ‘The King Is Dead’ can perhaps be seen as a reaction to all of that complexity, as step back from the high minded concept and a return to a more stripped down ethos and perhaps a homage to some of their roots; REM (in fact Pete Buck features on a couple of tracks here), Springsteen, Americana and bluegrass to mention a few, exposing what those of us have followed their careers have always known – they are brilliant songsmiths.

Opener ‘Don’t Carry It All’ kicks proceedings off in fine style, Colin Moloy’s instantly recognisable warble contrasts, as it does to great effect through much of the album, with Gillian Welch’s earthy, bluegrass tones to produce a stirring slow, yet extremely catchy, stomp of a tune, underpinned with traditional Americana instrumentation.

In all their travels in to Shakespearian high concept, Meloy and co. Have never lost their deft touch for conjuring vivid imagery in the context of a four minute catchy Indie pop blast; ‘Calamity Song’ is the most jovial song about mass earthquake casualties I ever heard.

There are still the odd references to ‘dowager empresses’’ and the like, Moloy just can’t help himself, but this is music largely shorn of extraneous lyrical excess and in moments like ‘Rise To Me’, addressed to Moloy’s young son, ‘January Hymn’ and ‘Dear Avery’ what is left is genuinely emotive and moving in a way that I just didn’t get from ‘Hazards Of Love’, as clever and entertaining as it undoubtedly was it just didn’t carry this kind of emotional load.

In between these moments of quiet introspection though are some fun times too. ‘Rox In The Box’ reminds me, somewhat bizarrely, of ‘Dirty Davey’ by The Levellers (and that’s a comparison I never thought I’d make on this website), ‘Down By The Water’ rocks along at a fair old lick, with a real hook to its refrain and ‘This Is Why We Fight’ has a real early REM darkness to it.

In all, ‘The King Is Dead’ sounds like a band who feel they’ve proved how clever they are and now have the maturity to give their obvious talent room to breathe. They’ve discovered that there is a beautiful elegance in simplicity and as a result this album is simply beautiful.