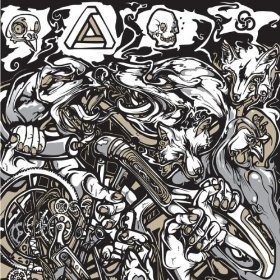 Based in Nottingham but hailing from all over the bloody place, this eclectic mix of geography is in line with the schizophrenic energy that is central nervous system of ‘SNIB’ from Alright The Captain. ‘SNIB’ is the kind of album that invites the rather average reviewer to resort to clichés like ‘like being punched in the face with a…..‘ or ‘like being bludgeoned to death by a….‘ or ‘like going ten rounds with….‘; unfortunately I’m well below average so I can’t even complete those! Instead I’ll just say ‘SNIB’ is FUCKING ACE!!

Like a strict ballet instructor this album always keeps you on your toes and leaves little respite to catch a breath. From the outset it’s like your ears are being involved in a particularly epic cage fight with a superior fighter. As soon as you think you’ve got to grips with a time signature or a move, they step it up, alter their position and keep you guessing. There is little time for boredom here – an album of all killer and no filler. ‘Even Guilt’ which starts gently enough turns into a nerve shredding behemoth with a deftly stabbed guitar attack, also see ‘Mega Mega Drive’ that morphs into a maelstrom of dirty fuzz bass and electronic screeches, which are the audio equivalent of touching a sensitive tooth with the foil of a chewing gum wrapper.

‘SNIB’ treads a fine line between beard stroking math rock and beer fuelled, pogoing riffage. ‘Neo Tokyo’ which combines mathier than thou finger tapping with a departing riff that wouldn’t sound out of place on a Rage Against The Machine track. This isn’t to say they sound anything like RATM, in fact the album sounds like a load of other bands but at the same time none at all. It’s almost as if they reached into my record collection, got all the best bits of some of my favourite bands and knitted them into a really itchy jumper that demands my attention 24/7 – a purl stitch of ..And So I Watch You From Afar, reverse stockinette stitch of Castrovalva, a slip stitch of Antikaroshi, a box stitch of Redneck Manifesto and maybe even an embossed moss rib of Mogwai (apologies to all the pro knitters out there if this makes no sense at all).

So, in short we may have a contender for album of the year already, and if we don’t then 2011 is going to be an epic year for great music. As a departing note I want to give you a bit of health advice. If like me you’re all filled with cold and feeling rather sorry for yourself, try listening to ‘Rostov Could Get It’ – guaranteed to shift and disintegrate any mucus you may have bothering your chest region. Whoop whoop!