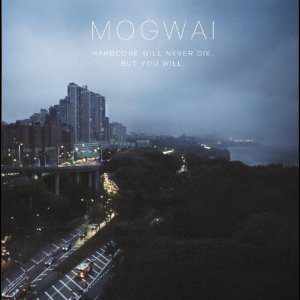 Album seven is the kind of territory that eludes the life of most bands. But if they were name-checking youth on their first two records, Mogwai (now into their 16th year) can no longer elicit the word-of-mouth excitement of a capricious debut; the cautious pay off of a beautifully-composed second; or even the satisfaction felt by a well crafted fourth.

No, a seventh album could so easily lead towards safe, but rocky, terrain. Particularly when its predecessor, while possessing its fair share of strong tracks, also contained a string of lacklustre instrumentals that had listeners reaching for EP+6 and turning the volume up.

On ‘Hardcore Will Never Die, But You Will’ it’s clear that this talented group of musicians has resorted to more gadgetry, more layers of sound and more BPM than ever before, to make something that contains both the sludge of low-end guitar and bass on one hand, and the sweetest and deftest of keyboard melodies on the other. It is to Mogwai’s great credit as composers that songs that reside in both camps can happily share space on the same album.

That said, this is the band’s most surprising record to date. Second track, ‘Mexican Grand Prix’, is as motorik as it sounds and isn’t like anything else they’ve recorded, primarily because of its driving Neu!-like tempo, vigorous bass line and some vaguely discernable vocals, courtesy of Stuart Braithwaite and violinist Luke Sutherland. Equally, while perhaps more recognisable as the work of Mogwai at its most mighty, ‘Rano Pano’’s achingly clever snaking melody of fuzz seems to open up a whole new style of song-writing to the band.

A sense of warm familiarity certainly permeates the opener, ‘White Noise’, with its simple piano melody and sweeping locked-in bass line; in as much as ‘Letters to the Metro’ is simply an unnervingly pretty track. Cut from similar cloth, ‘Death Rays’ wouldn’t sound out of place on ‘Happy Songs For Happy People’, but here it manages to exude its ascendance with more integrity than those other two songs, moving into an overdriven resolve at the three-and-half minute mark.

True heaviness is all over ‘San Pedro’ though and despite having the potential to be the most obvious track on ‘Hardcore’, on repeated listen it reveals some lovely, intricate levels are at play. Two distinct melodic hooks intertwine, merge then divide again, coated in thick dense noise. ‘George Square Thatcher Death Party’ labours this new up-tempo direction set by ‘MGP’ and ‘SP’ into parody, however, with a tricksy autotune vocal that might well be better explained as a band in-joke. But no matter: there are three superb tracks seeing the album out.

‘How to Be a Werewolf’ has an almost carefree attitude imbued within a marvellously simple guitar line and, by two minutes in, you wonder how Dominic Aitchison keeps a grin from his face as his bass leads the song home. ‘Too Raging To Cheers’ is, like ‘Rano Pano’, a triumph of composition. Unexpected sections reveal themselves at just the right moment so that the song retains a sense of progression, but also surprise. Sutherland’s violin line, atop the swirling keys and processed drums, acts as the introduction to one of the most rewarding moments on the record.

Finally, ‘You’re Lionel Richie’ takes an Earth-like hook and runs with it over three movements: a slow building soundtrack opening, a beautifully pared down arpeggiated section and then an immense release of magma-slow drumming and squalling guitars that pick up the simple refrain from the opening and throw it around like a dead thing. It’s hard to tell whether it’s violins or guitars towards the end, as if proof that exactly how Mogwai go about making this kind of imposing yet beautiful sound, isn’t really the point.

Of the criticisms levelled at ‘Mr Beast’ and ‘The Hawk is Howling’, the strongest seemed to imply that a late maturity was settling in, favouring keyboards and electronic trickery over guitars. Yet it’s precisely the band’s confidence to try things out – and, here, a sheer willingness to make blatantly enjoyable songs – that takes ‘Hardcore’ to a more satisfying level.

Mogwai make the case that heavy distortion and pure clean sound can co-exist on the same record, and their latest effort works as both an intelligent and heartfelt whole. There is, truly in the spirit of Hardcore it would appear, still nothing they cannot do.