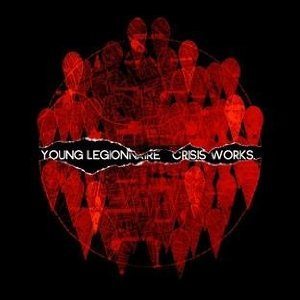 I will attempt to do this review while making no comparisons to related bands.

‘Crisis Works’ by Young Legionnaire starts off with the bloody thunderous ‘Twin Victory’. A rip- roaring, riff-fuelled punch to the cranium that highlights the juddering time signature changes of Yourcodenameis:Milo (didn’t take long).

‘Numbers’ and ‘Chapter, Verse’are less frantic but show Mullen’s craft for knocking out heavy-rock/pop songs and also include some damn fine guitar work, that sounds eerily similar in tone and melody to some of James Dean Bradfields’ finest stuff.

‘Even The Birds’ has a much darker tone and is where Gordon Moakes (that guy from Bloc Party) really shines with his trademark finger punch bass playing. Throughout the album Moakes really makes an impact, with only one other guitar to play off of he’s free to go off on his own at points; ‘Nova Scotia’ a perfect example.

Things slow down in the middle of the album with the ethereal ‘A Hole In The World’; a song so drenched in splendour it easily holds up to Bloc Party’s ‘So Here We Are’. Following this is the dark-pop Placebo-esque ‘These Arms’ that shows off the versatility of ‘Crisis Work’s’.

Overall for what could be described as a super-group of sorts, ‘Crisis Works’ is a phenomenal album that only gets better on repeated listens. Highly recommended.

Released May 09 on Republic of Music