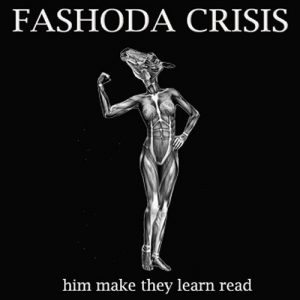 Every now and then, a band come along who remind you that new music isn’t all a procession of identikit nonsense. It’s not all about bands who want to be Kasabian, Razorlight, or the most watered down version of Mogwai you’re ever likely to hear. Sometimes a band will metaphorically threaten to cut your face with a knife, then, when you’re least expecting it, bludgeon you with a hammer instead.

Fashoda Crisis are just such a band, and by Christ and Herod on a tandem are they good. Coming across for all the world as The Bronx covering System Of A Down, they rock in a pure, unashamed way. This album, ‘Him Make They Learn Read’, is 26 minutes of face melting vitriol, noisy, discordant guitars, and hammered drums.

Despite how heavy, and above all, noisy ‘Him They Make Learn Read’ is, it’s fun. Take the incredibly titled “The Berry-Brown Skin Of Robert Kilroy Silk”, for example. I’ve been into music for twenty years, and in all that time I don’t think I’ve ever heard such an angry, vitriolic blast lamenting just how shit our popular culture is. But for all its anger (with lines such as the bellowed “I am BBC3, I am cancer of the intellect”), it contains lines such as “Welcome to the Greatest Ever 100 Greatest Ever TV Clip Shows as narrated by Vernon Kay,
I am Vernon Kay,
I’m wearing the skin of Vernon Kay, and I’m on my knees wanking like a primate”

Utter, utter genius, but screamed with the most convincing anger I think ever heard in a song.

The System… inspired ‘Alien Dinosaur Brundlefly’ jumps, hammers and slides though its duration, visiting down tuned metal sounds here, and catchy (yet heavy) pop beats there. To my mind it sounds just how nu-metal should have done; instead of the rap/rock, frat boy bullshit that the likes of Limp Bizkit and Linkin Park gave us, it should have been angry. It should have been the voice of a generation, standing up tall and telling us what’s wrong with the world. What it should have done is what grunge did ten years before. Still, with this from Fashoda Crisis, it’s better late than never.

As you can probably tell from all this, vocalist and lyricist Simeon Ralph doesn’t care overly for traditional song structure, choosing instead to phrase his outpourings more as a kind of visceral beat poetry, leading the album to end up sounding more like a call to arms than a simple rock record. And you know what? It’s a welcome call to arms. It’s a shame they’re not advertising any gigs on their website at the moment because, now I’ve been introduced to them, I want to hear more from them. I want to attend their lectures; I want to be a bigger part of their vision.

If you favour the heavy, then buy this album immediately. I would say that it’s my favourite metal album this year, by some distance.