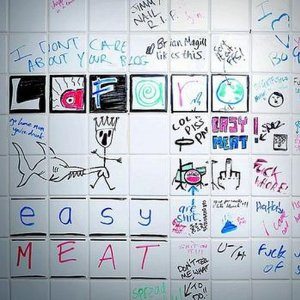 Looking for an album that’s going to tear you a new arsehole? Then look no further. For ‘Easy Meat’ by Belfast three piece LaFaro, a pure blooded, visceral rabbit punch of an album, the boys clearly got their hands on an American Military guide to Shock & Awe tactics and have followed it to the letter. From the opening blast of the aptly titled ‘Full Tilt’ it never looks back and never lets up with is brutal attack of thunderous drums and earmelting riffage.

Stylistically, these boys are not doing anything new but they do it with such style, verve and enthusiasm it’s impossible not to smile listening to this, even while your ears are bleeding. With all of the tunes coming in around the three to four minute mark the album delivers a series of short, sharp blows to the body. Seriously, I cannot stress enough how utterly brilliant this album is.

Fantastically, the ‘proper’ songs on the record are punctuated by little snippets or skits of the band’s banter, studio moments and general nonsense that would potentially be annoying on a lesser album but here they just add to the sense of barely controlled chaos and give a wonderful insight in to the playful nature of the band.

Hot on the heels of the opening track come the almost Queens Of Stone Age like stomp of ‘Sucking Diesel’, but imbibed with far more urgency than anything QOTSA have recorded in ten years (and containing a lovely nod to mates And So I Watch You From A Far), the incendiary minute and a half thrill ride that is ‘Wingers And Chips’ and then ‘Boke’.

Oh my sweet lord, ‘Boke’. If the opening salvo leaves the listener reeling then there’s every chance that ‘Boke’ will deliver the knockout blow. Just pure adrenalised rock and fucking roll. There’s no other way to describe what might well be my favourite song of what has been a strong year. It makes me want to break things, pure and simple.

Four songs in and we’ve already had more brilliance, more face melting genius, than most rock bands pack in to a career but it doesn’t stop here. ‘Have A Word With Yourself’ is what passes round here for a ‘slow’ number, but I use that word advisedly. It still grinds and swaggers with the best of them and then the title track the returns to the balls out blitzkrieg attack. It’s just relentless, but never anything less that absolutely thrilling.

If I sound like I am eulogising above and beyond here you’re wrong. If anything, I’m being restrained! ‘Easy Meat’ is a masterpiece of its kind. If I had to level a criticism, and believe me I’m reaching here, then LaFaro could be accused of being a tad one dimensional; there’s no clever time signatures, complex structures or knowing references but, fuck it, what a dimension. This is rock music as it’s meant to be; loud, brash and insanely exuberant.

In a year that has been really strong musically, this record sits there right at the top of our list of potential albums of the year. Do yourself a favour and go and buy it now.