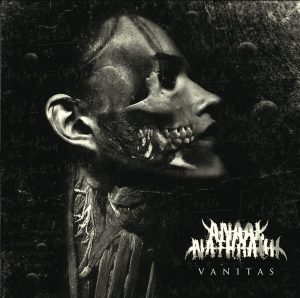 Vanitas is the ideal driving album. That is to say, on a particularly exhausted drive home at the end of an increasingly aggravating week at work, you may well just say “fuck it” and swerve your car off the road into a terrifying deathroll down the embankment, and Anaal Nathrakh‘s formidable eighth album would make for the perfect soundtrack to accompany this. Say just before the Kingston bridge on the M8 Westbound, but you pick somewhere that suits you.

As your vehicle spins and smashes asunder, the furious and nightmarish amalgam of screaming black metal and breakneck speed mechanized drumming that has propelled Anaal Nathrakh to the upper ranks of extreme metal will match the scenario beautifully. The conflagration of furious and dizzying riffage and relentless concussive drumming of “The Blood-Dimmed Tide” and “Of Fire, And Fucking Pigs” as you enter a blur of shattered glass, erupting dashboard and agonized metal. Pummeling breaks and mid-tempos in “In Coelo Quies, Tout Finis Ici Bas” to suit crushed legs and punctured lungs. The lurching and rolling blast of “Todos Somos Humanos” spinning with the horizon.You may even find your life flashing before your eyes, the howling sonorous chorus of  “Forging Toward The Sunset” fitting the reflection on your mourning fiancee or that you should have been kinder to your mother…

You might take stock of your successes and failures in life, and compare to Anaal Nathrakh‘s career to date – smashing into the UK metal scene like a bollard through a passenger door in 2001, they’ve released consistently strong albums that stride confidently between playing to their strengths and experimenting with their sound – at this stage still showing invention and freshness on the seething menace of “Feeding the Beast”. All the while Anaal Nathrakh have had a prolificity to shame other bands, and maintained the same bleak but impressively intellectual vision of humanity taking in all manner of themes from philosophy, religion and literature. Literature like the book you meant to write and might have found the time to if you hadn’t taken that job but the money was really helpful and it doesn’t matter now because the engine is on fire…

Finally sliding to a halt, passing in and out of consciousness with the cacophonous sounds of traffic in mayhem fading, Vanitas carries you from the wreckage on a restrained but powerful and soaring outro track with “A Metaphor for the Dead”.

All in all Vanitas is both an exemplary piece of blackened extreme metal from a vital UK act, and a robust display of skill and invention in Anaal Nathrakh‘s ability to produce albums that engage and excite but never abandon their blistering and ferocious true nature. And hey, it could be worse. You thumb might have brushed the radio button on the steering wheel in that fatalistic swerve, and you could have ended up on Real Radio, and all of the above would have happened to Deep Blue Something’s “Breakfast At Tiffany’s”.

Vanitas is now out on Candlelight Records.