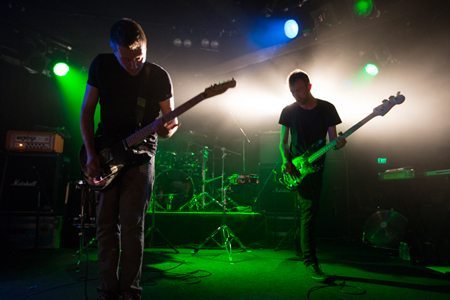 So back in 2006 I spent 8 hours waiting patiently outside a pub in Camden Town (the name escapes me but rest assured it was a shithole) to see 65daysofstatic… And I didn’t get to see them. No amount of cajoling, begging, pleading or even my best Aussie accent was enough to get me in the door so I departed, shattered that the one chance I had to see one of my favourite bands had resulted in a big fat nothing.

Fast forward to 2013 and I was finally granted my wish. On a 36 degree evening (that’s Celsius for all you Imperial users, so fucking hot) Melbourne’s Corner Hotel hosted the mighty 65dos, backed up by sleepmakeswaves. And what a show. Sleepmakeswaves have rapidly become one of my ‘go-to’ Aussie bands – I drag new people to see them every time they play and they always convert new disciples… And tonight was no exception. Tight, melodic, energetic and clearly happy to be there I can’t wait to see what these boys will bring out next – hopefully the sky’s the limit for them.

But it was really all about 65dos for me. From the first time I heard the intro to ‘Retreat, Retreat’ back in the day I knew I was hooked, and I’ve taken great pleasure in seeing their fanbase and popularity grow, along with their music…. And this show did not disappoint.

From the opening lines of ‘Drove Through Ghosts To Get Here’ the crowd was in the palm of their hand, eager for the 65dos sound, and jumping away through the intense heat as waves of sound crashed over us. ‘Piano Fights’, ‘Await Rescue’ and ‘Install A Beak…’ all flashed by far too quickly, but then ‘Crash Tactics’ kicked in. I’m not entirely sure if it was this track (was dancing pretty hard) but with no speech 65dos managed to get the entirety of a grizzled, veteran and normally quite jaded Corner Hotel audience to kneel on the floor before the peak… and they did. And when the track peaked and the whole crowd jumped up as one my mate turned to me with an open mouth and wide eyes, simply mouthing the word ‘fuck’. Fuck indeed. Epic. It was hot as hell in there, with sweat just about dripping off the roof as everyone bounced up and down… and that’s something I’ll always remember for every other gig at the Corner I go to.

‘Dance Dance Dance’, ‘Weak4’ and ‘Debutante’ were next, with the live versions almost better than the album versions as the sometimes clinical electronic sound on the recording was replaced with straight up balls – I was curious to see how the new material would sound and I can tell you in one word – huge. Also impressive – multi-instrumentalists… I was wondering how much of the extra drum sounds they would do live and the answer is as much as they can, which always provides a bit of extra theatre to the viewing experience.

‘Fix The Sky A Little’ was next which ran by in a blur, leading into a new track ‘Taipei’ (or ‘Type A’, depending on who you ask)… not counting Silent Running this is the first new 65dos in a little while, and got me excited all over again – new album for 2013 hint hint? I can’t recall much about it apart from the pounding rhythm and Joe’s frenzied movements – then it was ‘PX3’ and then…..

‘Retreat, Retreat’. Yeah. A small measure of humble, self-deprecating banter and then it was time for a good old fashioned bounce around to a track that is timeless… and it was awesome. Snappy snare drum, big guitar and overall an excellent mix, which can be hard at the Corner. My mate came over with a beer for me and a big shit eating grin as the track finished… which promptly turned into a beer shower as my favourite track ‘Radio Protector’ started. If you don’t know this track go listen to it right now, I’ll wait.

It’s epic, right? Right. I’ve been waiting a LOOONG time to hear this track (had almost given up), so there was definitely a sense of ‘fuck yes’ to this song, and the boys did not let me down. It was big, melodic, loud, heavy, frenetic and enjoyed by everyone – smiles, dancing and head bobbing abounded as the boys rocked it hard on stage. A wonderful moment for me, and I’m pretty sure everyone there. As the final chords rang out over the heads of the audience the 65 boys finally took a quick break and buggered off to grab a towel for a wipedown… only to come back for one more sweat laden track, ‘Tiger Girl’. A great way to end the show, with waves of 65dos distortion, passion and pleasure.

So – probably my gig of the year and it’s January 4th. I get to see Godspeed You! Black Emperor, My Bloody Valentine, Einstuerzende Neubauten and more in the next few months and I’ll tell you now, the bar has been set pretty damn high. I wish I could follow them on tour, because once was nowhere near enough. And in highest praise for them – my neck really fucking hurts from going too hard. Thanks 65dos for ticking one off my bucket list. You rock.