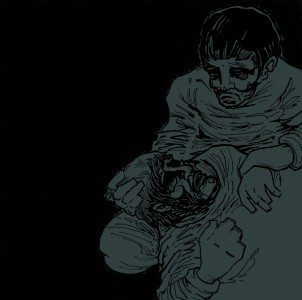 Released on Riot Season, Swarm of Nails and SuperFi Records.

Art Of Burning Water are an absolutely ridiculous band. This London based 3-piece smash out crazy combinations of face crushing riffs, which if not dealt with properly could put you in hospital. Their latest offering This Disgrace, which was released on the wonderful Riot Season is no different and takes the band onto another chapter on their legacy of brutality.

‘You Won’t Know Till You’ve Cried’ lets us in gently with some single string slashing before the pounding riffs start attacking, overlaid with samples of a German conversation where a female seems to be in complete despair… maybe she knows what’s coming. The vocals kick in and we’re pulled right into Art Of Burning Water’s chaotic little world. The vocalist known as "Grief" is snarling and intense. I can’t decipher a single word he throws at us from his throat on this entire album but I can tell you one thing… he’s fucking pissed off! The opening track is almost a battle between unnerving samples and seething riffs. Some people might find the heavy use of overlaid samples a bit much but I don’t... it’s 2013, let’s play with technology and go places.

From here they tear into ‘It Didn’t Get Any Better’ which is nothing short of huge. If this doesn’t mileage out of your head bobbing neck muscles I don’t know what will. This band is in ferocity Disney Land, delivering insane riff patterns on a colossal scale. Imagine a bloody battle between grindcore band who are armed to the teeth with explosives against a noise rock band who have somehow gained super powers; that’s pretty much what I’m hearing. This extreme experience of a record slows down, speeds down but never lets you go. There are all kinds of boundary breaking hard rock like sludge and doom thrown into the violent mix too… simply sublime.

‘Lacerations to Hand and Faith’ carries pummelling us down the same vicious road, pure filth before a nasty sludge like break down. Think Melvins on fine form but made to sound so nasty you could cry. We then have a minute of unsettling industrial drums combined with disturbing sample before Side A has finished punishing us… phew I’m alive.

If you bravely decide to go onto Side B 'We Failed' is unleashed. It rips into nasty sounding guitar before an exhilarating ermmm.. I want to say chorus but there are no parts of This Disgrace anyone could possibly call a chorus.

We’re then given some rest bite at the beginning ‘Since His Collapse’ with a slightly “relaxing” breakdown and samples before we’re punched in the gut with severe guitar chugging. The track then morphs into a Black Flag like direction with a hint of Dog Shredder math metal experimentation. Awesome!

Just to ensure they have destroyed every living cell in our brain the last track is a mixture of feedback and weird electronics which would make Whitehouse proud. This Disgrace is an absolute triumph of a record. It shows us a band not just playing heavy music for the sake of it but a genuine and successful attempt to do some different to everyone else. They are criminally underrated and this is guaranteed to shit all over 90% of heavy music this year. An absolute pissed off monster of a record!