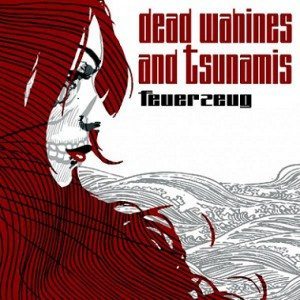 I confess, I had never heard of this band before - my sole reason for requesting this album was a track called 'Release The Kraken'. Because who doesn't love a Kraken reference?

Well - am I glad I did. This is not just one of the best stoner/fuzz albums of the last few years, it's one of the best ever. EVER. QOTSA? Pffffft.  Slo Burn? Nope. Fu Manchu? Ehhhhh. This album is probably the closest thing to a perfect release I’ll hear this year... In fact, excuse me if I wax lyrical, but it's that good.

So, while everyone on the interwebz is indulging in the 22 year old circle jerk that is the new My Bloody Valentine release (me included) I might just slide this one under the radar... But I feel what I write won't do it justice - you need to hear it yourself!

Dead Wahines and Tsunamis opens with 'Cyclops will be Beheaded' - a rollicking way to start the album and a clear indicator of the band's intentions for the next 70+ minutes as low thudding bass, melodic fuzzed up guitars and some great, powerful drumming all compete for space in your eardrums. It’s wonderful, and made me immediately think of Blues For The Red Sun in its scope and warmth…. A sense of space, time and place permeates this release, making it far greater than the sum of its parts.

Next up is 'Landkreuzer', where we start to see Feuerzeug's colours get nailed to the mast - superb dirty question and answer guitars, groovy bass and crisp, driving drumming. And with nary a gap we're into ‘Evel Knievel Has Kissed The Devil’ – one of the best tracks on the album for me with its irreverent subject matter making for some super cheesy vocals that normally I'd hate, but here I love. These are bookended nicely by a bass line that would be home in a Red Hot Chilli Peppers track and some great forceful guitar work that explodes into a big 60's breakdown and finish. It's great, and I suggest it as a driving song for sure.

I'm going to jump ahead a bit to 'Nitroghostcar' - a corker of a track. Over in three and a half minutes this drips aggression, swagger, rock, sweaty concerts and beer. And Motorhead. It was at this point on the album that I realised how truly melodic, groovy and fuzz laden the guitar work was - I'm running out of suitable comparisons but maybe Kyuss with 2 guitarists? A stoner rock version of The Darkness? Anyway, it's a rollicking good time which precedes the sludge'n'roll majesty of 'Fusion Van'. If you close your eyes during this track you can see America's High Desert appearing through the windscreen in front of you as you cruise down an empty road, this track blasting at epic volume while the sun beats down overhead.

Their serenade to the Desert theme continues for the next 2 tracks, 'Cruising the Desert Pt. 1' & 'Cruising The Desert Pt. 2' which are more of the same melodic, rock structure... and the change from 'Pt. 1' to 'Pt. 2' is excellent, as the two guitars exchange solos to bracket the tracks. Lovely. Then there's some feedback to finish and we're up to…

'Release The Kraken'. This track opens with exactly the sort of balls and swagger you would expect by now, with a lament to brave sailors lost to a mythical creature as the vocal content while again some excellent, dark and melodic music swirls around them. It's the second longest track on the album and I didn't notice the time at all - everything feels justified to be in there.

And then after the initial few minutes of rock out it finishes with an ambient taper off into 'Kometa', a song with some lovely little wah/harmonic guitar lines swirling through the mud of bass while the drums propel you into the soaring prog-rock styled 4/4 stomp at the end of the track - I can only imagine how much fun this would be live, with arching feedback providing ample opportunity for a huge rock finish.

I'm going to stop there and leave you with the following - in a fortnight where a new Eels album and a new My Bloody Valentine album have both been released (two bands I have adored for many, many years), both have struggled to get time in my eardrums ahead of Feuerzeug. I'm even picky about what music with vocals I listen to and yet this album kicked in my door, beat me over the head and demanded me to love it - and goddamn it, I do. It's exciting, melodic, groovy, cheeky and not once does it drag for me - rare on a 70+ minute album. And it’s only their second release!

So after all that gratuitous wank on my part it boils down to this - if you like stoner rock, fuzzy guitars, big rock epics and simply great music, this is a compulsory album. It's not flawless, but holy shit it's close. This proudly sits alongside some classic albums and holds its weight against them all - a mighty effort. In fact, we're all spoilt that this exists - it's February and I have a heavy contender for album of 2013…. Even though this came out in October last year!

So, thank you 'Kraken' reference! Now - how to get to Switzerland... I'm exceedingly jealous of anyone who gets to see them live!

Promote your mixtape at ReverbNation.com