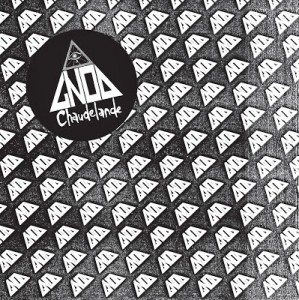 Space..the final frontier. These are the voyages of the starship Gnod as they take you to the outer reaches of space rock. Perhaps a more apt beginning would be the wise words of Nik Turner…DO NOT PANIC.

For it’s with the legendary Hawkwind that Gnod lay their badge, not that this is a bad thing. Chaudelande Vol 1 & 2 is a re-release of sorts (it’s an independent thing) which would tie in nicely with the newly released Space Ritual from the aforementioned Hawkwind. This is space rock for a new age though with more in common with the industrial sound of techno and Krautrock than it does with the magic mushroom insanity of the 1970’s.

‘Tron’ starts proceedings with it motoric rhythm building up into a crescendo which is both equal parts Can and Motorhead. It’s not easy listening, it’s not meant to be, but it affects the parts that not much other music does. Try it first thing in the morning for a quite different start to the day.

It’s not all about the riffs and beats though, bubbling vocals add disconcerting sounds to the pounding music. ‘Visions of Load’ builds on this but it is with the almost left turn of ‘The Vertical Dead’ that Chaudelande takes a different tact.

‘The Vertical Dead’ is quite astonishing in that it mixes tribal rhythms with a slow burning techno sound which drags you into its darker regions. It is a thing of terror and horror and takes a strong stomach to stay with it…ultimately though, this is a worthwhile experience.

The rest of the album can’t seem to keep up with this and suffers ever so slightly. The riffs do become rather formulaic and you find yourself wishing for some respite. Of course, this is music for the live arena and so would make perfect sense there. It’s only with the final track ‘Genocider’ that we glimpse an ironic side to Gnod though which makes sense of what we have been listening to. About halfway through the song there is what seems to be a homage to Black Sabbath which completely throws you back to the 70’s and reminds you where this music originated from. Music that has been done before but on this showing who cares as it is so much fun.