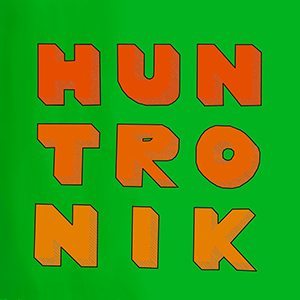 There was a point in the late 1970s/early 1980s when the 'new wave' exited the modes of punk and entered a hybrid era of genre-bending rock/pop which embraced the possibilities of using synthesizers alongside 'traditional' rock instruments. So it was that everyone from New Order and The Pop Group to Squeeze and XTC used synths as an integrated instrument in their earlier work. They weren't strictly electronic acts, but their sound at the time wouldn't have been the same without the sonic possibilities of synths. Anyway, why mention this in relation to the new release by New York-based "power-psyche rock trio" Huntronik?

Because this is what I started thinking about when I heard the opening bars of 'Rabies'. This is a track which grooves jerkily, electric pulses bouncing along with vocals reminiscent of Chris Difford. Lyrical references to 'machines' and 'decimal places' overcoming 'instinctive' decision-making hint at the opposition between the objective and subjective, the mechanical and the organic…a theme which is reinforced by the music. Real drums played with precision, keyboards echoing the motorik beat, the musical passages switching like someone just pressed the next preset button on the musicians' heads. It's a worthy opener to the album Huntronik.

As the album progresses, the net of influences and styles spreads. Yes, there are elements of psychedelia, but the overriding vibe is of a sort of eclectic alt-pop. Melodic, mildly dirty-sounding and knowingly retro. I mentioned XTC, The Pop Group and Squeeze earlier on for a reason, as Huntronik's music bears comparisons to all three in different measures. The songs are occasionally playful and funky, the lyrics questioning the wisdom of technology, but there is never the feeling that this music has been made with irony at heart; a rarity, I think. It's serious stuff for these guys.

'We Can Build You', drones all deep, staccato vocals. 'Hair' comes over all spiky punk-funk and fuzz. Stand-out track 'No Deceiver' is epic; some very funky saw-wave bass, trebly organ and fuzzy rhythm guitar which gets a bit bluesy in the last few bars. Vocals are again to the fore, but there's a lot of cool instrumental going on here too.

How an album appears as a cohesive whole is often a measure of its critical success. What strikes me about this album is that it does hold together well despite, or maybe because of, some of its stylistic variety. It's quirkiness is not due to knock-about musical slapstick or ironic humour; it comes from its fairly serious presentation of social critique without being too po-faced and marrying it with a sound which is occasionally frivolous and exhilarating.