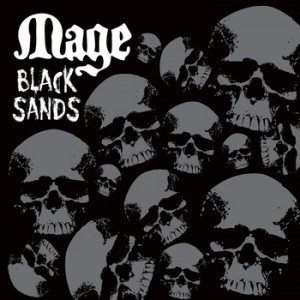 Out now through Witch Hunter Records

Mage are back with another reason why you should be proud of the British music scene at the moment. Formed in 2010 they've been rumbling forward with crushing riffs and a sound even Kyuss would be proud of. With their second full length, Black Sands definitely has a ballsy rock'n'roll feel, just adding that extra something to the doomy atmosphere this record conjures. Like a breath of clarity in a sweaty biker bar.

Immediately, like within the first 5 seconds, I'd decided I liked this. Being on the hardcore crust/doom bandwagon at the moment it really is refreshing to hear how different something not to distant can sound.

'Cosmic Cruiser X' is a perfect opening track, full of kick, serious riffage, and heavily laden in stoner rock smoke, it sets the tone of the record for the next 35 minutes ideally. The guitar solo towards the end of 'Danse Macabre' keeps the classic rock tones afloat and throws in a little separation between tracks, and gives you time to whip out the air guitar- if you feel so inclined. 'Star Born' is a straight up Sabbath/Slayer hybrid in my opinion, a perfect mid-way point and indicator that these guys have a variety of styles they want to convey and clout your ears with. 'Witch Of The Desert' harks back to the sounds of early Black Sabbath but with a Zakk Wylde-style assault.

Without describing this record track for track, all that's left to say is that these guys are taking an old sound, a sound you'd have thought would have been done to death by now, but have given it new life. I can picture these guys not being out of place on any aggressive music line up- with music like this it fits in amongst so many different things without ever seeming too wildly out of place. So, even if you like primarily doom, or rock, or metal, these guys will slot in nicely and shake things up a bit. If you like your stoner metal and new music, these are guys for you and Black Sands should definitely make its way into your collection.