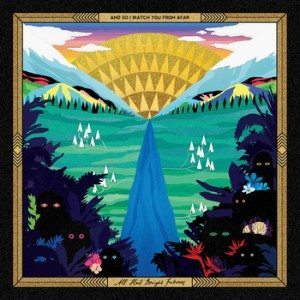 And So I Watch You From Afar

Released on March 19th through

Okay we all know And So I Watch You From Afar (or should do), they've stood out from the crowd since I first heard them. Forever compared and tagged with other instrumental acts. For me I came to think of them not as "Instrumental" just a damn phenomenal band. All Hail Bright Futures sees them re-write the script and if Gangs was a step away from confines of genres, this is a gigantic leap

All Hail Bright Futures comes after a period of mini crisis for the group. They parted ways with guitarist Tony Wright, enlisting former Panama Kings man Niall Kennedy as his replacement. Also they spent their longest time ever off the road due to a member requiring surgery. This prompted them to have to make the potentially embarrassing request to fans for donations to keep the band ticking over. Not to mention a quickly dealt with leak of the album.

All that is in the past however, and All Hail Bright Futures has its eye keenly on what's to come. And fittingly the title says it all, the overal feel of this album is positivity and fun. They've made a bold shift in style and incorporated never heard before elements into the sound. More vocals than ever before, experimentation with various new sounds and a more slick feel to the production. This is a futuristic eclectic mix that may take some by surprise, while also capable of winning many new fans.

Initially it took me off-guard, but even Gangs took me a while to fully wrap my head around at first. Some may wonder why they've tweaked the formula. For me I think it’s a refusal to play it "safe" or stand still for too long. I'm all for evolution, especially when it sounds so damn good.

Having said all that, don't panic; it’s not a total departure. What many love about ASIWYFA is riffs by the bucket-load, energy and infectious songs. You get that times 1000 here, and more.

The most familiar sounding songs 'Big Thinks Do Remarkable' 'Like a Mouse' and ‘Ambulance’ feature plenty of riffs that twist and turn Johnny Adger's thick bass tones and Chris Wee's pounding rhythm. The former is the first to introduce actual vocals with the warm refrain. It also includes head spinning riffs and a glorious mosh-down (like a hoedown but moshier) section. While the latter features a cheer leader style chant over futuristic punk riffs. These are going to go down a storm live, and try listening without wanting to pogo round the house.

Songs like 'Ka Ba Ta Bo Da Ka' and 'The Stay Golden' are like nothing ever heard before from ASIWYFA. The former features cut-up acapella samples and handclaps, it’s like Flying Lotus remixing Battles and completely infectious. Throughout All Hail Bright Futures Rory Friers uses some gloriously bizarre effects, the riffs and sounds at times make me think he may have some form of time travelling device. 'The Stay Golden' begins with a funky cow-bell (more cow-bell!) and Atari on acid melodies before a spine-chilling vocal refrain drops. The track culminates in euphoria inducing rhythms and horns, seamlessly blending into 'Rats on a Rock'. Riffs crash and collide in mesmeric wonder, before the headfuckery of steel drum effects and dub vibes leaves you wondering what the hell is going on. Strings and vocals combine until more riffs knock you sideways before you've had time to think. The third part of this trilogy (like ‘Homes’ on Gangs) is the blissful chill-out vibes of 'Trails...'.  The trio of mind bending tracks is truly stunning stuff.

Despite the new approach, there are plenty of typical ASIWYFA moments of wonder that have you reaching for re-wind here. Some of them are full songs, incorporating jaw dropping sections. 'Mend and Make Safe' is one of them. A classic in the making, its flute solo over a Dj Shadow style breakdown is astounding. Riffs mixed with handclaps and more melody than humanly possible making it a joyous experience form start to finish. It’s a re-occurring theme on All Hail Bright Futures euphoria and anthems abound, its more air-punching and shirt stripping off than anything they've done before.

Album closer 'Young Brave minds' is evidence of this. With a rhythm that's like a cross between We Will Rock You and We Care a Lot. This is another epic sounding album closer they make a habit of. There is so much to take in on All Hail Bright Futures it is an album that will have you coming back to constantly. Probably finding a new favourite track each time!

All Hail Bright Futures is a new chapter in ASIWYFA recorded output. The future is bright, the future is And So I Watch You From Afar. All Hail.