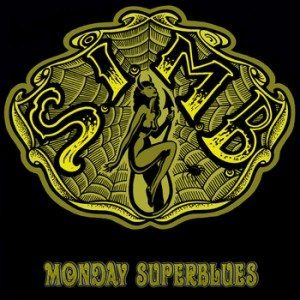 Out on CD through Ozium Records

Monday Superblues is the debut album from the Heavy Groove, Stoner, Sluge, Dutch quartet  S.I.M.B.  They formed in Amsterdam in 2008 and is the coming together of members from other underground bands. Their line-up is Gantcho 'Babbata' Kojuharov on vocals, Svetoslav 'Sven' Georgiev on guitar and back up vocals, Deyan 'Chico' Monev on drums and Nikolay 'Hubi' Hubenov on bass.

There are a few special guests on this album one being Matt lynch, who done the graphic design of the CD, with the cover artwork being created by Gino Angelov from Diamond Jack Tattoo Parlour, London. I have a feeling that the lady in the spider web might be a Demon Lover.

If you are going to call your band Satan is my Bitch (S.I.M.B.) then you better be good and they are. The music is heavy, with a solid rock sound and if you play it loud then Monday Superblues will keep you speakers working to their max.

The album starts with a split 55 second classic Sabbath sounding guitar intro with what sounds like the stone entrance to a crypt being opened. That I like! Then it breaks into 'Monday'. This track sets the tempo for the rest of the album.

"Oh yeah feels good, real good." This is the opening line to 'Demon Lover', one of the best songs on Monday Superblues. Gripping guitar riff and lyrics that say it all. It really does feel good.

'So Heavy so Slow', is exactly what it says. 'Alive', 'Mind of God' & 'If You Just Try', fill the album up nicely but in between these tracks is the track 'Satan Is My Bitch'. This is the track that brings this whole album together. Bass, drums, guitar and vocals all working in harmony, with lyrics that will be sung by the crowd at all the live gigs.

S.I.M.B. have done well for a Debut album. I would like to think they will be around for quite a few years to come. I hope that Babbata's singing will become just a little bit more gritty in that time but i wouldn't want to loose the energy that he puts into each song.

This is a very well produced debut album that you will play at lot.