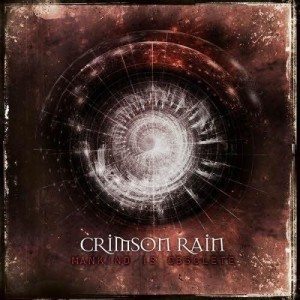 Out now and available through here

Brought to life in the Water District in Argovia, Switzerland which (according to their website) is “generally known for its rural landscape and foggy winters rather than for good rock music”. Well, Crimson Rain have disproved that fact…. the bit about not having good rock music not the weather bit. How would I know that? Who am, Michael Fish? Jeeezzzz cut me some slack.

Mankind Is Obsolete starts with a track called ‘Intro’ with a traditional (ie 70s) vibe of orchestration: strings and violins abound. So far so prog. But then we kick into the riff of ‘Endgame’ and things start to get interesting. Initially filtered to sound like it’s coming out of tinny radio speakers before becoming a full-bodied mix, this is Crimson Rain saying that what you are about to hear is neither traditional (ie 70s) prog OR radio friendly.

That being said there are great moments of radio-friendly music on here (more on that later) and some genuinely interesting and fun (*gasp* fun? In prog? Surely not….) moments too. For example, ‘Vigour Of The Law’ features a wonderfully laid back jazz-inspired break down midway through the song. You can almost taste the smoky atmosphere of the Belgian beat club only to have that ripped away from you by an Yngwie-like dash around the fretboard. Genius.

The Prog Metal tag tends to conjure up Dream Theater comparisons and expectations. Crimson Rain however, unlike Dream Theater, never put technical wizardry before melody and the song itself.  And whilst they certainly have the chops, they prefer to build the song around melodies and riffs.  Take for example the track ‘Our Gleam Of Hope’ features choirs that soars melodically and anthemically the musical versions of hope. As does album closer ‘Heliocentric’. Wonderfully haunting.

It wouldn't really be prog with a song that is longer than the time between Tool albums. So say hello to ‘Raise Of The Indignant’. Although it does lose Prog Points (™ & © Me 2013) for being only 11m 34s long. Quitters. Some of you might say that 11 minutes is long enough but that would result in a severe telling off form me so let’s say no more about it. This track is much like a Knickerbocker Glory, layer upon layer of goodness that rewards the patient eater…. I mean listener.

The awesome snakey riff at 4 mins is guaranteed to ruin any mosh pit with it's extra beat. There’s an instrumental section last just 2 minutes, lesser prog bands would have spent at least 8 minutes on this but Crimson Rain jam and then return back to the verse (and vocals) admirably.  7 mins. in and here are some ethereal voices and wintery keyboard sounds accompanied by a distant guitar pulling notes out of the ether. And now an audio sample concerning  secret societies and censorship. Lovely stuff. Although the bass riff at end does sound contrived. Almost like it was tacked on at bassist’s request.

This is an atmospheric and all encompassing piece of work from this Swiss quartet. This is accessible and meaty enough for the metalheads with enough emotion and wizardry (technical playing not the cape and magic wand kind) for the prog fans. And look – only one Dream Theater reference.

Now, who fancies some Toblerone?