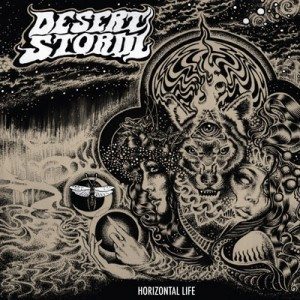 Out now and available through here

Horizontal Life is the new album from Desert Storm. The Heavy Stoner, Sludge/Metal, five piece band from Oxford that formed in 2007.  They consist of Matt Ryan - Vocals, Chris White - Guitar, Ryan Cole - Guitar, Chris Benoist - Bass, Elliot Cole - Drums.
This album is full of big chunky riffs, great drumming and bass playing. Then there's the deep gritty vocals from Matt Ryan, a bit like Captain Beefheart after gargling a lot of JD. There are also a few sections of some nice Space and Ambient music, giving you a lot of styles to take in but worth every cord. Horizontal Life starts off with five very strong Stoner tracks, two of which are 'Astral Planes' and 'Shadow of an Eagle'. These are revamped tracks from Desert Storm's self titled album and much improved. 'No Slave to Master' has some bong bubbling drug overtones to it as well as Stoner bliss guitar and wild vocals. 'Word to the Wise Man' is the opening track and really sets the Stoner tone while 'Mr Strongbatch' finishes this section of Horizontal Life and side one if it ever went to vinyl. Fingers crossed guys!!
'Enslaved in the Icy Tundra' and 'Lunar Domes' come in the form of a more Metal/Sludge sound that will hammer your speakers but its the excellent 'Titan' that delivers the first ambient space section.  Titan is the largest moon of Saturn so this could be a tribute song to Titan its self. This is a huge song that has an epic feel to it. 'Shenzhen' has a bit of everything and also one of my favorites. There are passages of Space, Metal, Sludge even a touch of Death Metal.
It also has the best vocals from Matt which makes this a great powerful head banging (or nodding at my age) song but nothing will prepare you for 'Gaia'. I really don't know where this track came from. Full of instrumental class, a surprise addition to the album but I would really miss it if it wasn't there. Gaia was the Goddess of Earth, the great mother of all. This song may become the mother of all. It will certainly appeal to a wider listening audience. 'Hofmann' and 'Scorpion' are the last two tracks from Horizontal Life. Also revamped song from Desert Storm's self titled album. 'Scorpion' is the track that will get the most attention. What a great way to finish.
Desert Storm have really nailed it with Horizontal life. Listening to the earlier versions of the revamped songs shows just how they have grown over the years. I've spoken about the guitar work and vocals quite a bit, so I need to also point out the excellent drumming and bass work.   An album full of Heavy Riff Stoner, Metal, Sludge greatness.
Four out of five headphones. Buy it and play it Loud!!