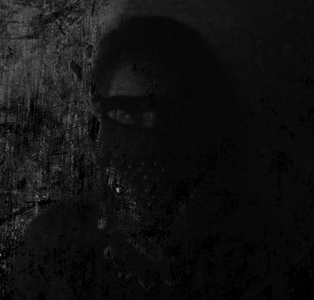 Darkness prevails for Brighton based FVNERALS...

(((o))): So, first and foremost, who are FVNERALS and what are your musical backgrounds?

We are a newly formed band consisting of Syd Scarlet (guitar), Tiffany Strm (vocals, synths) and Antoine Mansion (drums). Syd and Antoine played in several music projects together which were noisier, punkier and sludgier, whilst Tiffany was a singer-songwriter and used to sing in a punk band in Sweden.

We met in Brighton in December and quickly found that we were into the same kind of music, had similar interest and were getting along well so we decided to play music together. We had all been in several bands before so it didn't really take long to get things moving and start writing.

(((o))): Do you think your local music scene has had any impact on Fvnerals as a band?

Not really, we all just moved here so we've not been part of the 'Brighton music circuit' yet.

Our EP was home recorded during February. We didn't want to gig before we had a decent recording so we tried to focus on that aspect first. We also did a music video to try and introduce people to our visual universe that has an important place in our project.

(((o))): What do you think is the most difficult challenge facing new bands starting out in the industry today?

Having millions of bands around means it can be a huge challenge for a new band to stick out. I think more important than that however is the fact that general passion amongst people for music is sadly decaying.

(((o))): Every band has different aims, and sadly very few decent ones get proper fame and recognition. What would have to happen for you to feel like you have made it as a band?

We want to be able to gig and tour enough to be able to have our gigs the way we want them to be! We’d also like to insert our complete universe and thoughts into what we do, to go beyond it being just music.

(((o))): So the substituting Vs for Us in band names is very 'now'. Is there a specific reason for it in your case & do you not worry that it might date you to a particular era in the future?

We picked it mostly for aesthetic reasons. We really liked the name and the symmetry the V was creating with the A. We don't really pay attention to other band names and what's now and what's not in terms of names, so that hasn’t really crossed our minds at all!

Shannon Wright's "Over The Sun" is definitely the one we all have in common. There's something raw and tense that makes it a really emotional record. It is rare to reach such a level of intensity within a few songs, let alone with such talent and grace. The atmosphere is dark while fragile and the production fits her music and her live performances perfectly.

Anything that is new and inspiring is always worth introducing but if we had to pick specific artists, we'd say Soleil and Boy & The Echo Choir. Syd also runs the online Eerie Echoes where you can find other artists worth checking out and on free download, so help yourselves!

We are currently preparing our live set and are going to start looking for gigs in the near future to try and share our music as much as possible. Thanks for the interview and carry on the great work!