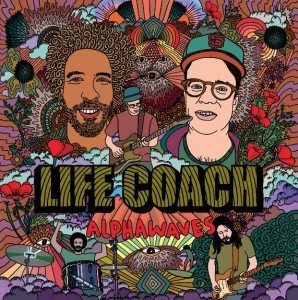 I’m not going to get started on the whole ‘motorik’ versus ‘krautrock’ debate, nor am I going into Phil Manley’s background of bands. If you know the name, you’ll know his history. What I will do is give you a quick synopsis of his new album/project – Life Coach. So – if you like Neu!, CAN and associated acts, read on!

So this album is all one big cliché – but in a good way. There are only so many different ways you can do a 4/4 beat with fuzzy guitars and ‘driving’ drumming but I’ve now listened to this a few times and it manages to skirt right on the edge of boring without falling into the chasm… mostly. The ethnic touches save it a little as the guitar can be a touch same-same in places, but overall it’s solid.

My standout tracks were ‘Alphawaves’ and ‘Mind’s Eye’ – both good efforts with some nice layered guitar, sharp, snappy drumming and some excellent mixing and ethereal effects. It is worth noting that a lot of press for this album mentions it being a ‘seamless whole’, designed to be played from start to finish, not piecemeal. However, while the album opens and closes with the same ethnic chiming bell, calling this a seamless whole seems a bit of a stretch. Take for example the track ‘Into The Unknown’ – a 5 minute 13 second track right smack bang in the middle of the album which ends with a fadeout. And you know what? You can hear that the track isn’t over. There’s a new drumbeat kicking in as it fades out. And then ‘Fireball’ starts up, with a riff and key signature that has really not much in common with the track before – and certainly has precious little to do with the beat your ears had just heard.

This is an ok album – it’s not quite the “less serious, melancholic version of Mogwai” that some press releases I’ve read extoll, but it’s not bad. Good guitar work, some great drumming in places and if you can look past the vocals (which are blessedly few but when there sound exceptionally cheesy) then it definitely has a reason to exist. And that reason is to rock you… slowly and thoughtfully. With perhaps a gluten free beer, a button down shirt and some thongs.

However, the cover makes me want to cry.