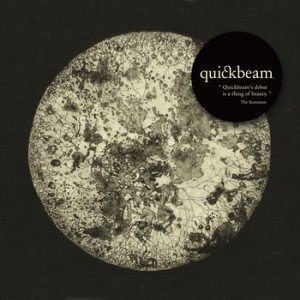 I really wasn’t sure how to start this review, or how to do ‘Quickbeam’ justice with mere words so I'm just going to come right out & say it; Glasgow’s Quickbeam have recorded this year’s album of the year. The true injustice here is that music this stunning, emotive and brilliantly played is probably going to be overlooked by the masses. Another fantastic (Scottish) band who will give those of us with a beating heart reason to believe. Reason to hope. Reason to live.

This is one of the finest hours of music you’ll hear. The album is only 52 minutes long, but the full hour will be made up of going back to ‘The Great Expanse’ to hear that glorious moment when the track stops momentarily, only to begin again with a melody and arrangement that will make your heart explode. An exquisite joyful fluttering of harmonium (?) that sounds not unlike the Italian National Anthem. You’ll play it again. One hour of magical music.

Quickbeam eschew song writing structure, often neglecting to bother with a chorus, instead letting the music transport the listener with creative flourishes of strings, brass and woodwind instruments. There are 3 gorgeous instrumental interludes, ‘Mountains’, ‘1743’ and ‘Far Out At Sea’, the first and last having the brilliant ability to conjure up images of the track’s title.

So let us return to the beginning of the album and opening tune ‘Remember’, one of the tracks to feature a chorus, and it’s lovely too. The hymnal vocals (from Monika Gromek) that feature throughout the album are ushered in on a soundscape of wondrous violin/cello. I must mention the production and arrangements on this album, they are exceptional and you have to remind yourself that this band are not signed to a major label. (In fact they credit Creative Scotland for assisting with ensuring the album got made at all).

The lengthy intro to second track and debut single ‘Seven Hundred Birds’ is melancholic and mournful, but highly emotive so that you’re left with a feeling of euphoria rather than sadness. ‘Immersed’ might have connotations of drowning but it’s an uplifting song with a vocal melody and final instrumental flourish that raises you up from the waters.

Quickbeam referenced Sigur Ros in the Press Release that went with the album, which attracted me to them in the first place. ‘Fall’ is certainly one moment that echoes the Icelandic melody makers when the alternative vocals of Andrew Thomson take over. There are quite a few tracks on the album that feature the muted brass and twinkling pianos often favoured by Sigur Ros but not in a plagiaristic way. Scottish highlands and lochs are the imagery inspiring here and there’s certainly a warmer feeling in the sounds.

‘Home’ is one of two tracks that allow Quickbeam to swell the music into an eruption of guitars, recalling the heady swoosh of Slowdive. ‘Grace’ being the other, both are gorgeously melodic and the extra dynamic is a welcome moment.

The aforementioned highlight ‘The Great Expanse’ is positioned at track 9, the flow throughout the album is perfectly paced, with the interludes and alternative male/female vocal tracks ensuring you remain mesmerised.

Closing track ‘One To Hold’ gives you a warm embrace and ends the album in a joyous mood, we’ve had an emotional journey, trauma has inspired, we emerge at the journey’s end ready to set sail again.

I hope I’ve managed to convey to you just how incredible this album is. I don’t think I can satisfy myself with whatever I write that will do the band true justice. You must hear it for yourself, you must enrich your life with Quickbeam’s music. Part of me wants the masses to hear Quickbeam and part of me just wants to keep it for myself.

To quote Echoes and Dust Editor Dan, this album is ‘All kinds of lovely’. A perfect summation of a perfect album.