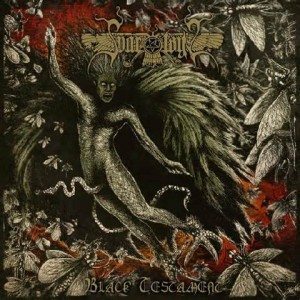 Out now (EU) and on June 25th (US) through Agonia Records

A ghastly feeling immediately takes hold upon introduction to the Black Testament. As the pages turn, the body is slowly sucked in and encapsulated in darkness. Rigidity is felt in the hands and the stomach as the sounds begin contracting their heavy grip around the intestines. All of a sudden a cold chill and a familiar transfixing energy are felt.  The dynamism of obscurity and decay, the recollection of life lost.

As one song bends to the next, the progression follows a journey heavy with rapacious vocals that ignite a fear that’s both disquieting and apocalyptic. As 'Carving A Temple' progresses, so begins a walk down a spiral staircase of unimaginable expanse. This descent is both dark and dreary alike, reminiscent of something unknown and unsettling. The drums create a storm and the guitars weep, the atmosphere grows darker and darker.

‘Eyes of the Earth’ strikes with an eeriness that feels as though you’re being watched from afar, like an ominous being is burning a hole in your back. With a guitar sound that almost screams, a grimacing scene is painted. The album closes with ‘Black Testament,’ a song that winds and weaves in haunting tempos that guide the listener to the end, unleashing the hammering that closes the book.

This album as a whole will delight the tastes of someone with a thirst for Dissection (only more raw), Watain, Sorhin, or Craft. Hailing from Sweden, this is the bands 7th full length in follow-up to their last release, Wrath Upon the Earth. Svartsyn is a Swedish word for “pessimism,” and the gloom and blackened ghastliness of this album holds true to that meaning.