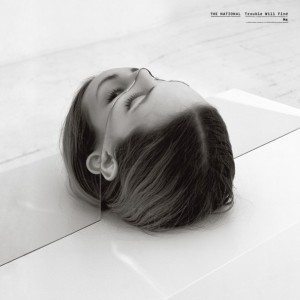 Picture the scene; The National are touring with a rockier group than themselves, who suggest enhancing their famously relaxed sound with drugs. The National, being naive stock up on weed and valium, record Trouble Will Find Me, and singlehandedly invent dinner party indie.

This didn’t happen, but it feels that way.

The National were never the kind of band to trouble hotels with worries of broken TV sets and squid in the bath. Not for them the debauched tales that made Motley Crue a rock n roll cliché. They’re more likely to play a quiet set to accountants called Nathan than set fire to a venue for a laugh. Even by their standards though, Trouble... is a low key affair.

It’s a pleasant enough release which will no doubt be well-received by their fans, but it doesn’t go anywhere exciting. Most of the songs have a quite lovely breakbeat drum line, with varied timings proving a deep technical understanding. This is a clever album, but it’s boring.

Matt Berninger has a calm, measured baritone voice, but where Johnny Cash used his voice, filling it with piss, vinegar and spite, Berninger barely stretches, maintaining what is almost a drone from the start. In ‘Don’t Swallow The Cap’ he sings “I have only two emotions, careful fear and dead devotion”, but judging by his delivery even that’s a stretch. He’s almost disinterested, leaving the listener willing him to let rip and try something new. It’s almost claustrophobic.

The star of Trouble Will Find Me is undoubtedly Bryan Devendorf, a drummer who’s clearly in the wrong band. Under every track is his frantic percussion, urging the dirges to greater heights, but ultimately being swallowed under the weight of too much production, indistinct guitar and barely audible piano.

‘Graceless’ is a moment of clarity, where The National step it up a gear to walking speed, or perhaps a gentle canter. You get the feeling that Devendorf’s timing has tricked the band into picking up the pace, so that they almost rock out. Then ‘Slipped’ comes in, with limited percussion. Bryan’s had his wrists slapped, the naughty boy.

Trouble Will Find Me isn’t a bad album by any means, but through its 56 minute running time you find yourself yearning for some variation. When you get some, it’s very quickly taken away. It’s a shame, because, judging by The National’s earlier releases - notably Alligator, and Boxer - they’re capable of much, much more.

Still, if you’ve got Jeremy and Natasha coming over for a fair trade dinner party next week, you could do worse than pick up Trouble Will Find Me while you’re out getting a nice pinot noir. I recommend Oyster Bay. Reassuringly expensive.