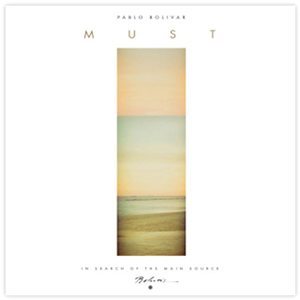 Are you a deep dub lover? If so, Must by Pablo Bolívar is really a must for you! If you have never heard his music I strongly recommend you to dive into it, maybe starting from this album, and I'm certain you’ll find yourself a fan of Pablo Bolívar.

Pablo Bolívar comes from Barcelona and has made a name for himself with the releases for Curle, Regular and Absurd. His debut album, Anjanas, was released in 2006 and starting from there he became one of the most respected and acclaimed electronic music artists in the Spanish scene.

As a producer and DJ he creates music that inspires the imagination and allows listeners to take their own personal journey. Mixing dub, ambient and tech-house sounds, he created a really original music range spread over classic 90’s house music, warm electronic and slow disco. And Must, the Spanish producers’ third album, is a demonstration of his ability of mixing sounds coming from his love for deep dub.

Must, set to drop on June 17 via Bolívar's own AvantRoots label, is a 10 track album that in about 55 minutes will bring you into his dubby warm house sound.

I was very curious to go through this album and I believe a lot of you perfectly understand me.

What do you expect from a song titled ‘Rise Your Demons’? This is the opening tune of the album and it’s close to the previous Bolívar’s style due to the classic-sounding arpeggios and the continuous echoing drum beats. It’s something we have already heard from him and it’s a very welcomed and warm intro to the new Bolívar’s experience.

We welcome the Bolívar’s deep house in ‘Eleven Years’, a meditative and contemplative tune like the mood of the previous track but with a faster rhythm. It’s like if the first two tracks are the soundtrack to two moments linked by a logical time consecution.

‘Midnight Frogs’ is one step ahead. The constant bass-line is notable, a bit monotonic and interrupted by some electric melodies.

The melting pot between Fabel and Bolívar is a somewhere located place that is called 'Off Soft'. Listening to this song you discover that ‘Off Soft’ is also where delicious bass tones meet  jazz echoes bringing electronic sweet beats in the background. It’s really a nice listen. The same jazz notes also crowd the tight and atmospheric ‘Diamonds’.

Mastra gives vocals, the only one throughout this album, to the melodic grooves of ‘New Order’, a minimalistic combination between tech-house and techno.

‘Don’t Hold’, ‘Keep Moving’ and ‘Heat’ end the Pablo Bolívar's' third full-length album in the overall style of Must that is slow, dreamy, deep-house, perfect after hours on the beach. The strong presence of Bolívar’s music on the beautiful beaches of Ibiza doesn’t surprise me.

The first two titles read together are like an exhortation to feel the music, stand up and follow the rhythm. In the end, the sonic architecture of these tracks doesn’t allow you to resist!

The last song, ‘Heat’, is a great way to close the album. It’s a slow ambient track to offer the listener an emotional conclusion.

I have been through this record numerous times, more than I used to do for an album review. Perhaps it is because Must is like a Matryoshka doll where dolls are placed inside each other. In the same way Must has so many different styles inside that each time you listen to it you go to a deeper level of it and so discovering something new. It seems that Bolívar has been able to assemble together enjoyment and relaxing atmospheres releasing an album that is suitable to cover a wide range of moods. My suggestion to all of you is to press the play button and sit back because I’m sure you’ll find what you need from this very beautiful release that is really a Must for your summer time.