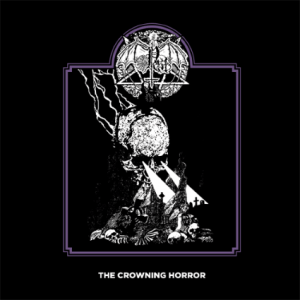 Pest introduces themselves on their website better than any other human ever could. “Pest (Swe) was formed in 1997 by Necro and Equimanthorn. Pest plays pure Black Metal in the old vein, no females or keyboards involved!” While the description did induce a smile, they truly do hold true to making music that is of the ‘old vein.’ A few tracks in and you start wondering if this album is from 1993 or 2013.

The Crowning Horror is the perfect polyamorous blended relationship of black metal, punk, and melodic speed metal. Each genre is felt in the album throughout its entirety; all of them letting the other bend and move with a fluidity of resonance. The music is free flowing, not forced, with surprises at every turn. Just like in polyamory where members of a relationship are free to experience multiple partners, the fast punky tempos of  ‘Holocaust’ freely mate with the death rattle that’s felt in 'Demon' as the lyrics are screamed with a ferocity and wildness. Variety and assortment at it’s best.

Reminiscent of Darkthrone (but in no way a copycat), this album packs a punch. The menacing sounds of the riffs that pour out of this album are never monotonous. The Crowning Horror as a whole will keep you guessing with its imaginative songwriting and changing speeds. A perfect example of this is the song ‘Devil’s Mark’. It is immediately reminiscent of an intro track on an old heavy metal album you dust off that you forgot you had but fall in love with all over again.