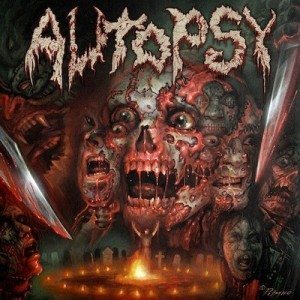 Some things never change. Autopsy and their unremitting, crude, destructive sound is one of them. The bands latest release, The Headless Ritual combines thrash riffing madness with death metal and elements of grind and doom to paint a landscape that is almost an expression of fifty different horror movies playing through the visual cortex all at once.

Reifert sounds demonic as his bile spitting vocals churn themselves out on the opening track, ‘Slaughter at Beast House’.  From the very beginning the track melts the listener into a pile of weeping, rotting carnage with its buzzsaw-esque riffing, violent drumming, and downtrodden tempos.  The sludgy elements of the track act as a festering primordial ooze that crawls its way downward into a sewer of filthy sound. The disgustingly lascivious leads set the pre-meditative stage for what the rest of the album brings to the table.

‘She is a Funeral’ is one of the most unique, “outside of the box” songs on the album. Different from Autopsy’s material as a whole, this song slows it down to a sway while still displaying elements of maliciousness at every turn. Reminiscent of Sabbath, the sinful and prominent tone of the guitars guide the song like ink laying an obituary on paper. The beginning of ‘Coffin Crawlers’ is reminiscent of being trapped in a nightmare (or in an old gory b-movie), suspended between sleeping and waking. Both depressive and manic, it almost induces a compulsory fear in the blood.

The track ‘When Hammer Meets Bone’ is the catchiest and most heavy hitting song on the album. A track that is both full of speed yet crawling, it holds true to the carotid artery of what Autopsy has always represented. The menacing sound of the song will start to stitch you up as frenzied and chaotic bursts rip you back open, stitch-by-stitch. With guts exposed, songs like ‘Arch Cadaver’ and ‘Flesh Turns to Dust’ pour battery acid into the open wound, causing the listener to writhe in pain.

Towards the end of ‘Running from the Goathead’ Autopsy’s uncanny ability to make the dueling guitar sounds of Cutler and Corralles as mouth-watering as possible are vividly put on exhibition. Both musicians skills are showcased and put on display like body parts fermenting in jars on the shelves at a laboratory. ‘The Headless Ritual’ closes the album. A track that evokes a chill to the flesh as it writes (what could be) the background music to an Argento film. It acts with the same precision and fervor as a serial killer meticulously dissecting a victim, tearing through layers of flesh with a heavy pressure.

Unlike a lot of old school bands that put out not-so-appetizing new releases, there is absolutely no need to worry when it comes to Autopsy. While they’re not afraid to step onto uncharted ground, they also keep their same spark and style alive with The Headless Ritual. The entire album is a repulsively wonderful set of ten songs that will satisfy and leave gore filled reminders imprinted on the brain.