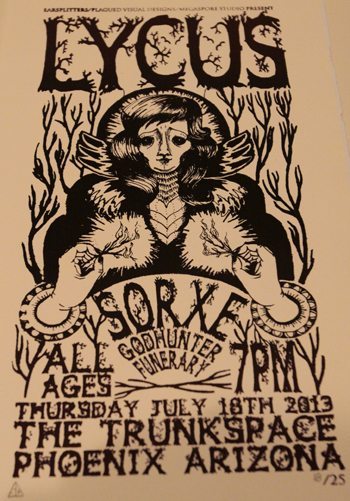 The power of sound is absolutely incredible, both restorative and medicinal. Although not everyone agrees with my same sentiment, I strongly believe that (most of the time) the louder it is the better. That’s one of the reasons I’ve always gotten so much out of seeing the music I love so much played live. There’s nothing quite like being pummeled with sound waves. It’s cheap therapy, a way to drown out the noise of the day.  With that said, Lycus (Oakland, CA) completely blasted the audience on Thursday night (July 18th) in Phoenix, AZ. Excitement for this show was building for weeks because of how much love I have for their latest release, Tempest (see review here). It was good to see people show up on a Thursday night for this show. It’ s always a bummer when a great band rolls into town on a bill with great locals and there are only ten people there to experience it.

Funerary, Godhunter, and Sorxe acted as the foreplay for the main event. All three were pleasing to the ears and great choices to create a perfect flow to the show. This was the first official show for Funerary. They play doom in the vein of Mournful Congregation, Grief, and Asunder. I’m sure there will be many great things to come from them in the future. Godhunter from Tucson, AZ followed them. Every single time I’ve caught one of their shows they always bring a heaviness that’s untouchable. For fans of bands like EyeHateGod, Down and His Hero is Gone. Sorxe played next. Also from Arizona, they are a unique and multi-genre, post-metal band that’s really beginning to make waves around AZ. I hear their name popping up more and more around town and that’s a beautiful thing.  These locals and so many more in AZ create that backbone for our scene. Check all three bands out and give them a listen for yourself. Spread the word. 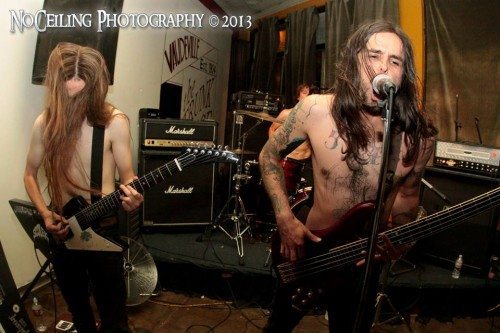 As Lycus put the finishing touches on their set up, sound check, etc., I felt the anticipation rising in my skin. One of the first things I noticed was how young they all are. Not that I’m old myself, I just didn’t expect such young musicians for such a mature sound. The band opened with ‘Coma Burn’, the first track off Tempest. There’s something about watching musicians pouring out the tracks you’ve only previously heard from speakers. I’m in no way musically talented but I’ve always enjoyed watching hands and fingers make the motions that produce the sound. Working together like bolts and screws to produce a machine. Although throughout the first song the drummer Trevor’s vocals weren’t nearly loud enough, the song as a whole struck with a furious sound. I snapped photos with my camera as I simultaneously let the track flood my ears. I remember feeling pretty overcome and held in the present moment, that’s what’s so curative about music in general. 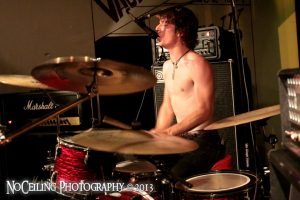 With a few yells from the crowd to the sound guy, Trevor’s vocals were turned up and the band as a whole was taken up a notch. As the next song played on, the growl of the vocals mixed with the progression of the instruments filled every corner of the room with murkiness. I took a moment to look around the room and saw sets of transfixed eyes watching the musicians as heads were banging around. Several people even had their eyes closed, taking in the sound for themselves. Lycus captivated the room. With heavy riffs and pounding drums, Lycus continued to spew their mournful notes all over the walls. 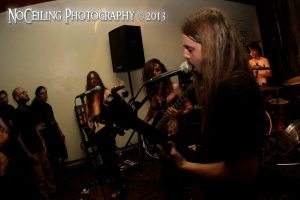 Lycus closed with the title track from the album Tempest. As the song began I got chills up and down the tops of my arms. ‘Tempest’ has to be my favorite song on the album, so I was more than thrilled to hear its notes downpour out of drums and amps. The song is pure melancholy and eeriness. Hearing the track at such a loud volume allowed the listener to not only hear the track, but feel it too. Dylan and Jackson’s guitar work mating with the weighty sound of Daniel’s bass was a spectacle to watch. Each musician was focused on their craft which transferred in the form of fluidity as the song progressed. As Lycus ended their set, I felt spent (in the best of ways). I went home with the intention of writing immediately and editing photos, but they completely wore me out. I went to sleep that night with heavy ringing in my ears and a grin on my face. The power of sound.

Tempest is out on 20 Buck Spin now, check it out and go see Lycus when they roll through your town. They won’t disappoint.

Thans to Dave and Liz at EarSplit. The gig poster was designed by Plagued Visual Designs and Megaspore Studios (Shona Crawford). 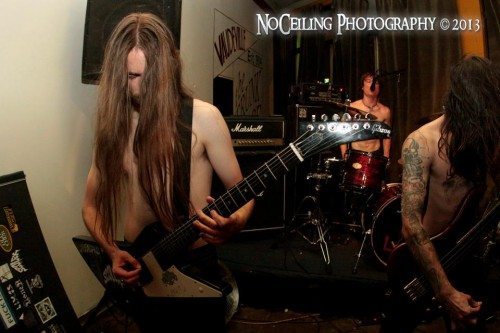