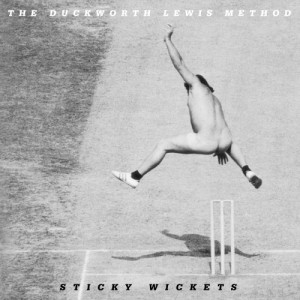 Summer is upon us once again, and with that comes the impenetrable world of cricket. Talk of wickets, googlies, and LBW will abound, and the vast majority of us will have no idea what they mean. Personally, I love the idea of cricket. In the same way that I find the Shipping Forecast thoroughly comforting; hearing a softly spoken broadcaster read out what amounts to a secret code in the dark, it’s lovely knowing that cricket is happening. With it comes images of sporting gents knocking a ball about on a village green, while spectators drink refreshing summer cocktails and clap politely. The Duckworth Lewis Method captures that feeling perfectly.

Sticky Wickets is their second album, after 2009’s wonderful self-titled release, and it’s just as pleasing on the ear, if not as immediate. There is no ‘Meeting Mr Miandad’ on Sticky Wickets, and perhaps the content is not as accessible, but I’m not here to review a document of cricket.

As an album, Sticky Wickets is wonderful. Most know that Duckworth Lewis are Neil Hannon of Divine Comedy and Thomas Walsh of Pugwash, but they don’t really bring either of their day jobs to this; not that that would be a bad thing. SW is an amalgam of styles paying homage to numerous existing acts; a hint of ELO here, a touch of Donald Fagen there, a snifter of 80’s Bowie in that bit. It all works as a kind of soundtrack to a film about cricket, if that makes any sense?

Rather than being all about cricket as a sport, there are tracks that look at the lives of those involved; in particular ‘The Umpire’. A downbeat, almost sorrowful song about a man who leads an entirely unspectacular life, driving his mid-range car in the middle lane of the motorway to his job as an umpire. This is a tale of his lament of the emergence of technology to replace him. This is Hannon and Walsh calling out for a return to a focus on humanity in the most sporting of sport, and who can blame them?

‘Out In The Middle’ is worth a mention too, in which we learn that it doesn’t matter how successful you are outside the boundaries of the cricket field, once you’re stood in front of those stumps, bat in hand, you’re nothing unless you can cope with that ball flying at you at 100mph. This is presented in a smooth, AM radio MOR pop style; the aforementioned hint of Donald Fagen.

Final special mention must go to ‘Judd’s Paradox’. Stephen Fry reads a poem by Hannon, pointing out the class differences inherent in cricket, but despite this, it being such a wonderful game;

“The bourgeoisie bat, the proletariat toil in the field all day
I should be incensed by what it represents
And yet it’s a damn good game
And although I hope that the peasants revolt
And cast off the yoke of oppression
Perhaps Europe’s millions can storm the pavilions
After the afternoon session”

It’s fair to say that Sticky Wickets will lose sales based on its subject matter, which is horribly unfair. Even setting aside it being entirely about cricket, it’s a wonderful pop record, and deserves to be the soundtrack of the summer for right thinking music fans.