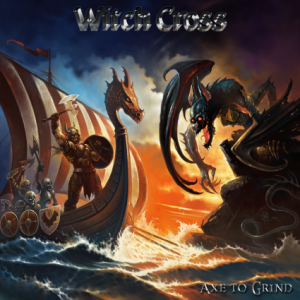 Out on July 9th through

Witch Cross...back in action. “Wait what?” “Those guys are still a band?” Their last full-length album Fit for Fight was released way back and is a staple for lovers of classic, more underground (and not as well known) heavy metal. Songs like ‘Rocking the Night Away’ and ‘Nightfight to Tokyo’ have become head banger favorites for both the old and the new fans alike. A new record after 30 years and only the sophomore release for the band automatically sends sparks of curiosity flying everywhere.

Hailing from Denmark, this European outfit with its fantasy and battle-ridden themes hasn’t released a full-length album since 1984. A certain type of nervousness arises when a classic heavy metal fan is about to press play on a ”fresh out of the oven” record after so much time has passed. A personal moment of silence was almost had as the worst was expected; this author anticipated having to hold a funeral service for the band. A sigh of relief soon followed as that classic guitar sounds started to inundate into the eardrums.

Although some could say that Witch Cross making a comeback after being out of the game so long isn’t entirely surprising. The past few years have seen an outpour of classic heavy metal and NWOBHM bands coming back (some from the dead) and releasing new music and also touring. Witch Cross decided to give it a go too, releasing some new music into the air. Why not, right? They definitely still have a following around the world.

This album is unquestionably different than the Fit for Fight release, but it’s not an entirely bad thing. Both old school and modern worlds intertwined, Axe to Grind as a whole has a lot of catchy songs that are reminiscent of the sounds created way back when. The track ‘Awakening-Pandora’s Box’ is one of those songs. The sound of the guitar is suggestive of something you’d hear blaring from a racing game in an arcade back in the 1980’s. The guitar tone almost completely picks up where tracks on Fit for Fight left off.

'Ride With The Wind' is a catchy, upbeat, and entertaining party track. It’ll make a person want to speed on a motorcycle, hair down, wild and free. The kind of song you’d hear at a bar and go, “Who is this?” as you slam down another beer. 'Axe To Grind' is one of the most ear grabbing songs on the album. It bends and twists and, although devoid of vocals, tells a story in itself. It’s that song that acts as insurance to an old school Witch Cross fan that yes, it’s really them.

Although Axe to Grind is almost a Witch Cross lite, the album will be found appealing to a diverse crowd of listeners. The only thing slightly off-putting about the album is the vocals, but that’s just one heavy metalheads opinion. Call me nostalgic but Witch Cross’s classic style makes a traditional heavy metalist almost crave and need a raspier tone of voice. The vocal style on this album felt a little too contemporary for the sound.

All in all there are some memorable tracks on the record and it’ll find a nice home in the collections of all different types of metalheads, both old and new. Axe to Grind is out on Hells Headbangers records on July 9th, 2013.