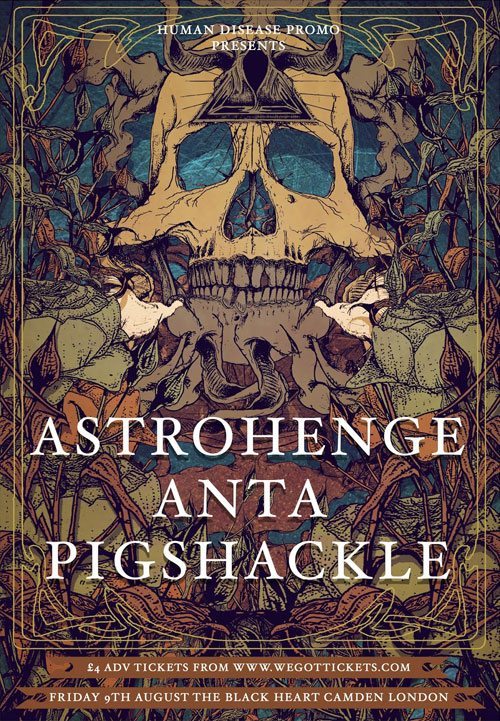 Band names: everyone has probably imagined what their band would be called if they had the inclination or talent to form one. Some people don't care too much about this process and just fire one together while others are more inspired, try High on Fire, and some do what they say on the tin, ummm, like Metallica (once upon a time). However, after a while there does seem to be trends in band names, at least in the heavy end of the spectrum. Dead is used a lot - Dead Meadow, Cosmic Dead, Dead Confederate (485 entries on Encyclopeida Metallum). Black too; Black Sabbath…Black Breath and 880 results in between.  Those examples are obvious perennials but now 'pig' seems to be having its moment in the sun.

So, joining Pig Destroyer, All Pigs Must Die and Skin the Pig are Pigshackle taking us up to a mere 18 bands – plenty of mileage in that, I’d say. Anyway, I like the name - sounds robust like it can take some damage and the band certainly give it out tonight. The mathy post-rock trio combine both literal and figurative heavy organ with sometimes sparse, sometimes stoner guitar and grow in stature after a jerky start to their opening slot that sees vocals slowly mixed into the dissonance with some added sax skronk until it all becomes a deluge of abstract prog.

Second on the bill are ANTA and I have less to say about their name you'll be pleased to know, but I can tell you their music certainly isn’t pan pipe derived.  Having dropped a new full-length effort back in June, ANTA get down to work - quickly stepping into the crowd to roar their space drama for what seems like hours but actually passes in minutes. Hair and fists fly through the crowd to tracks from Centurionaut with its preponderance of jagged grooves sounding like a psychotropic Flash Gordon soundtrack.

Headliners; Astrohenge, then, or, if my Wikipedia skills are anything to go by, 'Star-neolithic earthwork' are more down to earth than their name lets on. Stripped down to shirts and skins the four piece also delve into the crowd with effect petals strewn near dangerously pissed feet owned by dangerously pissed metalheads riddled with boyish (and it must be said that it is defiantly boyish) excitement. Despite no new album since late 2011 Astrohenge repay that pre-gig excitement in buckets of sweat and heaven tinged psychedelic ‘omnimetal’ with Rozeik and Harvey out front swinging a double guitar attack worthy of Robbo and Gorham.

Whilst sounding like classical musicians freaked out one day by the sound of Captain Beefheart on record, live Astrohenge are a more muscular, visceral affair. The riffs clench and release rapidly atop yet more humming keys from the sensibly attired Olly Weeks and a relentless beat, courtesy of the focused drumming of Kieran Iles, whirling around your head making for a beer slamming, high-fiving type of a gig and yes that is undoubtedly a good thing. The gigs that follow the new record will be worth catching that’s for sure.