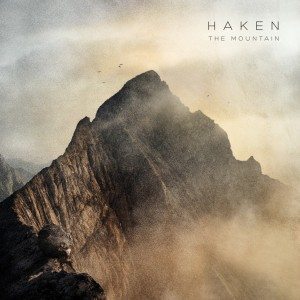 The Mountain. Interesting title, especially for me as I am an enthusiastic cyclist who every year during his holidays in the Alps tries to conquer as many mountains as possible (of course with ‘natural power’ on my bike). But that’s not the theme that London based prog-orchestra Haken had in mind when writing and recording their already 3rd album called The Mountain albeit…there a certainly elements in this story about ‘Life as a journey’ that apply to climbing to the top of the mountain on your bike as well. The Mountain is a very personal theme that can relate to anybody’s life experience. Listening to their top notch musicianship one would believe that these guys must have been together for ages but it took Haken just a short period of 4 years to have the absolute summit of the progressive rock- and metal world within reach.

Having released already 2 superb albums Aquarius (2010) and Visions (2011) and touring, playing with almost every top act in the genre, from Dream Theater to IQ and from Jon Oliva’s Pain to Hawkwind, the guys from London are now back with another stunning and breathtaking rollercoaster ride through countless musical styles and influences. In fact with a bit of fantasy you could explain The Mountain also as the pile of bands and influences Haken stapled together to form something shaped like a mountain and wherein Haken carved out a road to the top for themselves.

Progressive rock and metal are the solid base for this structure but as we get to know on their previous albums Haken likes to spice things up with jazzy, folky, avant-gardish (or weird) sounding interludes and that’s certainly the case on The Mountain. But the main, striking element on this 3rd album are the vocal harmonizations in the style of the sadly much overlooked Gentle Giant from the far seventies. The Shulman brother’s a cappella vocal parts will surely frown many young listeners. The bouncing, odd and quirky vocals are an effective tool of dramatizing the story told, something only Spock’s Beard occasionally did as well. And here it’s vocalist Ross Jennings who does the job completely by himself, hats off! I’m only wondering how they will bring these parts live.

Let’s have a closer look on the individual tracks then. ‘The Path’ starts the journey quietly with piano, strings and the soft vocals of Ross introducing the spiritual theme of The Mountain. This introspective introduction is a fine opener for the first big track ‘Atlas Stone’, a quirky piece that really starts off like an old IQ song. The guitar parts are very similar to Mike Holmes and even the vocals touches the distinct style of Peter Nicholls. But Haken quickly evolves this track taking bombastic choirs and even some funky elements into the whole, blending the different styles seamlessly.

‘Cockroach King’ is the first of 4 absolute epics on this album and it features for the first time explicitly the Gentle Giant influence: the brilliantly a cappella vocals. This is always a joy to listen to and Haken really pays tribute to this paradigmatic band. But there is much more to enjoy in this track in which the band members show-off their musicianship: progmetal riffs with a lot of twists, jazzy interludes, you name it. Complex time signatures? No problem. This challenging piece of music will for sure impress and disorientate many listeners.

‘In Memoriam’ is a relatively short song but despite the title it’s still quite heavy and has a great melodic hook. It reminds me of Spock’s Beard. The metal riffing, the GG vocals, it’s again perfectly embedded. ‘Because It’s Here’ brings back the lyrical theme of The Path: spirituality. Again a slow, atmospheric intro with impressive choir vocals by Ross. The second part of the song brings us a ballad in which some electronic produced sounds are used. Well done.

‘Falling Back To Earth’ is the longest piece on the album, the central part, clocking almost 12 minutes. In this musical whirlwind the number of influences is countless and it’s unbelievable how Haken manages to mix these together in one smooth, captivating piece of music. I found traces of Beardfish, The Mars Volta, King Crimson, The Flower Kings, Threshold, Dream Theater and Porcupine Tree. But just listen to it and you will discover more for sure. Awesome!

‘As Death Embraces’ is a deserved counter part with piano and emotional vocals, a beautiful contemplating song in which goosebumps are assured. It gives us room for another epic ‘Pareidolia’ (the psychological phenomenon of seeing ‘faces on the moon’ of hearing hidden messages when played backwards) another arduous but rewarding composition: technical proficiency meets intelligent song arrangements. Eastern influences shine through and as far as blending other bands/artist I would say this one has hints of Pain Of Salvation and Steven Wilson. ‘Somebody’ closes off the ‘Journey of Life’ and does this once more impressively. The band clearly slows down and concentrates on a atmospheric, almost ethereal mood in the vein of Anathema.

Haken keeps on growing and with their 3rd album The Mountain it is obvious that they are very near the solitary peak in their business. It was for sure a ‘hell of a ride’ to get where they are now but, to stay in the central theme, I hope that Haken has fully enjoyed this journey so far. For us listeners I hope that the guys will take a little detour before reaching the summit, because ‘what goes up must come down’.