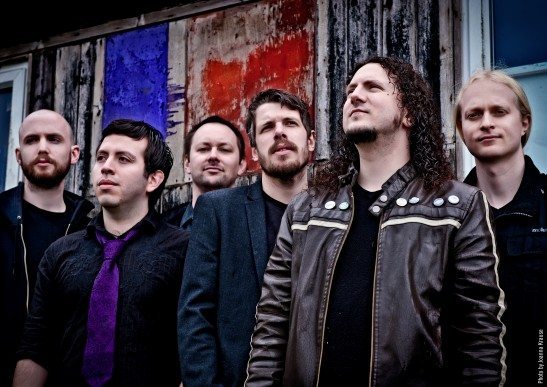 London based progressive rock/metal outfit Haken is about to release their 3rd album called The Mountain (reviewed here), which is one of the top releases in this musical genre this year. Ruud Peters took the opportunity on board to ask guitarist Charlie Griffiths some questions to find out more about the band, the new album, the song writing and much more.

(((o))): Tell us your view on the development from Aquarius to Visions to the new album The Mountain?

Charlie: Every album we’ve written has been a huge learning experience. We’ve definitely become better songwriters in terms of being a more cohesive unit and working as a team for the good of the song. The biggest development was our approach to lyric writing. Previously Ross [Jennings; vocalist] handled all the lyrics, but this time all six of us contributed, which made for a much stronger group connection to the songs; this is our most heartfelt and honest work to date.

(((o))): The band already had 2 excellent releases with raving reviews, was it difficult to come up with something that would at least equal both releases?

Charlie: By this point, we’ve lived with those songs for what feels like quite a while having played them live so much, that we’re mentally just eager to move on and create some new sounds, so we don’t really look back too much. I do think that this album seemed like more of a challenge to write, but mainly because we were a lot tougher on ourselves to keep the songs more streamlined as focused as possible. The saying goes ‘Kill your darlings’ – this album was a ‘darling massacre’ 🙂

(((o))): How did the band experience the last 4 years, it must have been a hell of a ride (work hard, play hard so the success comes naturally)?

Charlie: We’ve been really lucky to be able to make the music that we want to make and travel to different countries to meet and play for our fans. We have to work really hard to make Haken happen and fit it into our lives since it doesn’t pay the bills just yet.

Charlie: Thomas saw us play at the Night of the Prog festival in 2012 and he made contact soon after that, so I guess we played a good show and he saw some potential. It’s been fantastic to work with everyone at Inside Out because they’re so into this genre of music and they’re really supportive.

(((o))): How does the band manage to write new material, does it happen ‘on the road’ when touring or comes it all together in the studio?

Charlie: Richard [Henshall; guitarist] is usually the source of new material. He’ll usually send us all a midi version of a new composition and we learn it at home, then meet up at the studio and jam and experiment with the ideas. At that point everyone starts throwing in ideas and we try everything out until we find the arrangement that works for everyone.

(((o))): Tell us a bit more about the obvious spiritual theme, where did the idea come from? The quest of life is a rather popular theme in progressive rock music, how do you explain this phenomenon?

Charlie: We didn’t have a plan at all at the beginning and started with a completely blank slate. The music comes first and we let the music guide us emotionally and we’d talk about what the music was suggesting to us. Usually someone would say "I’m feeling something with this one, I’d like to write some lyrics". It gradually started to take shape and once everyone put their lyrics on the table we noticed that each song was about overcoming or adapting to something, be it losing a loved one or struggling with self worth for example. We were reacting to the music as honestly as we could. Maybe people that play prog think about this stuff more? – I think its probably because "Yeah baby I love you" type lyrics don’t go over so well in 7/8. 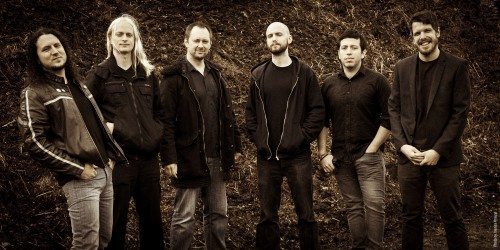 (((o))): The main new element/thread in the album would be the use of the Gentle Giant inspired vocal harmonizations, how did this happen and how difficult was it for Ross to do this all by himself?

Charlie: It’s true, we absolutely love Gentle Giant! We did a similar section in the title track from Visions but it wasn’t until we played it live that we tried doing the a cappella thing. It was always our favourite part of the gig, so we decided we should do more of that on the new album. I think Ross found it pretty easy to do and actually recorded each part as a guide track, with the intention that we’d replace the parts later. In the end we decided that Ross’ version was pretty much perfect, so we left them.

(((o))): Gentle Giant is for sure a much overlooked band from the past, is there perhaps another group from the past that falls in the same category and that could well be an inspiration for the band (maybe in the future)

Charlie: There’s a band called ‘England’ who are a bit like Gentle Giant and did an album called Garden Shed which is pretty great!

(((o))): Haken tends to blend many different styles and parts, how does the band manage to create such a organic flow from all the pieces of the puzzle?

Charlie: I think the key to that is not to force anything too much. So much of what we do is based on how it ‘feels’ when we play it, so trying the ideas as a band is essential. If we have a tricky transition we usually try two or three solutions and if it still doesn’t work, then it will probably never work, so bin it and come up with something else.

(((o))): If you were asked to delete one specific element you used on The Mountain, what would this, in hindsight, be?

Charlie: I would absolutely refuse. I couldn’t be happier with how it turned out and wouldn’t change anything.

(((o))): There are 4 big epics on the album, is it more difficult to write an epic than lets say a shorter track of about 4-5 minutes?

Charlie: It’s probably trickier to write the shorter songs, because you’ve got less time to create a complete emotional journey, so you have to be more concise and focused with the ideas, which can be a lot more work ironically.

(((o))): Can you tell something about the purpose of the track called ‘Pareidolia’ regarding the meaning of this word? Are there any hidden messages or other related phenomenons on this track?

Charlie: Ah well that’s all in the eye, or ear of the beholder you see. Diego [Tejeida; keys] wrote the lyrics to that one, so this is just my interpretation. The human brain is excellent at finding patterns and we often attribute meaning to things where there is none, so the song discusses the idea of basing your beliefs or world-view on something that you later realise has no foundation in reality. That moment of realisation can either crush you or make you a better, stronger person.

(((o))): Who contributed what on the album and were there any guest musicians involved as was the case in Haken’s previous releases?

Charlie: Ray [Hearne; drums] has a double life as a tuba player in various orchestras, so he drafted in some brass players and arranged and recorded this big heavy Hans Zimmer style ending to ‘Somebody’ which closes the album. I can’t remember how many tracks of brass there are, but there’s a lot and it sounds huge!

(((o))): Haken is quite a young band, how did everybody get on the path of progressive rock/metal ? What are the first bands/artist/albums every member listened to in this genre?

Charlie: I’ve no idea about the other guys I’m afraid, but I was really into Queen as a kid. As in I listened to no other band until I was 15. I still love A Night At The Opera and Sheer Heart Attack just as much today. That was the first music I remember listening to, so I thought it was normal for a band to play lots of different styles, suddenly switching between heavy rock, opera, folk, traditional jazz and top it all off with epic harmonies.

(((o))): What is the secret behind the ‘technical skills’ the band obviously has since every musician is a master on their instrument.

Charlie: That’s simply a product of having a daily practice schedule and sticking to it consistently. Anyone can do that, so I guess the real secret is that you have to really love doing it.

(((o))): Is there a vivid prog-scene in London and are there any new talented, prog-related groups from London you would recommend to our readers?

Charlie: It’s not really a ‘prog scene’ as much as a ‘prog venue’. The Peel in Kingston Upon Thames is where all the up and coming as well as established prog bands play. It’s a really small, out of the way place, but their ‘night of progression’ has really kept the prog spirit alive.

(((o))): The band toured with quite some ‘big names’ from the field of progressive rock, what response did you get from these bands regarding your work?

Charlie: Usually those big names are quite private and understandably want to chill out on their bus before the show, or they spend all day doing interviews, so they don’t get to see the opening bands. The Big Elf guys and Freak Kitchen were really nice to us when we played with them and both Roine Stolt and Mike Portnoy have been really supportive which is a great feeling.

(((o))): What are the plans for the future ? Do you consider to film/release a live DVD?

Charlie: At some point we’d love to do that, but our main plans are to do more touring and take our music to new countries.

(((o))): Will you ever reach the top of the mountain and what do you expect to experience there?

Charlie: We all will eventually, but it’s all about the journey, not the destination.

(((o))): Finally: What do you think of the saying “What goes up must come down” in regard to the band’s career so far?

Charlie: It feels like we’re still on the way up at the moment, but of course that can change at any moment – so that helps us stay motivated and treat every album and gig like its our last. I think about that a lot and I always remember learning about Sisyphus at school. As a punishment, he had to push a boulder up a mountain and when he reached the top it would roll back down and he would start again and again for eternity.