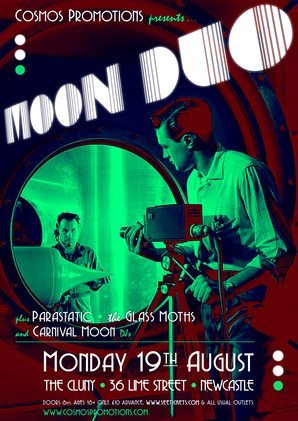 So I arrive at the always terrific The Cluny to watch and review Moon Duo, a band who I've been following since they were formed in 2009. Moon Duo are comprised of Sanae Yamada (keys/vocals) and Erik ‘Ripley’ Johnson (guitar/vocals) of San Franciscan band Wooden Shjips (silent ‘j’) and they play a heady blend of psychedelic drone mixed with a fair amount of krautrock. This intermingling manages to be both spaced out and full of indistinct but catchy hooks: a winning combination. The gig tonight is part of an extensive European tour in to promote their album, Circles which is roughly based on the 1841 Ralph Waldo Emerson essay, of the same name.

It was a crowded bill (see above) and I’d made mental note to arrive in time to catch one of the support acts; Parastatic. I didn't know much about these guys apart from the fact they're a local band. From their website, they play: "… spacerock, a dance beat cabal, softened by an aura of psychedelic overtones. The result is fortified, mutually electroloud and jizzed up by the motorik artistry of Krautrock, influenced and beguiled by the likes of Loop, Spacemen 3, Neu!, Spiritualized, Holy Fuck,  65 days of Static , Orbital and much much more musically and beyond." Now you can't go wrong with that!

Here’s a quick SoundCloud clip I recorded of their set, impressive eh?

Their setlist below only consisted of four songs,  ‘Like A Fraud’, ‘Doors Of Perception’, ‘Where's Your Base’ and ‘glaxoChem’, but all were executed fantastically well with some first-rate visual back projections. 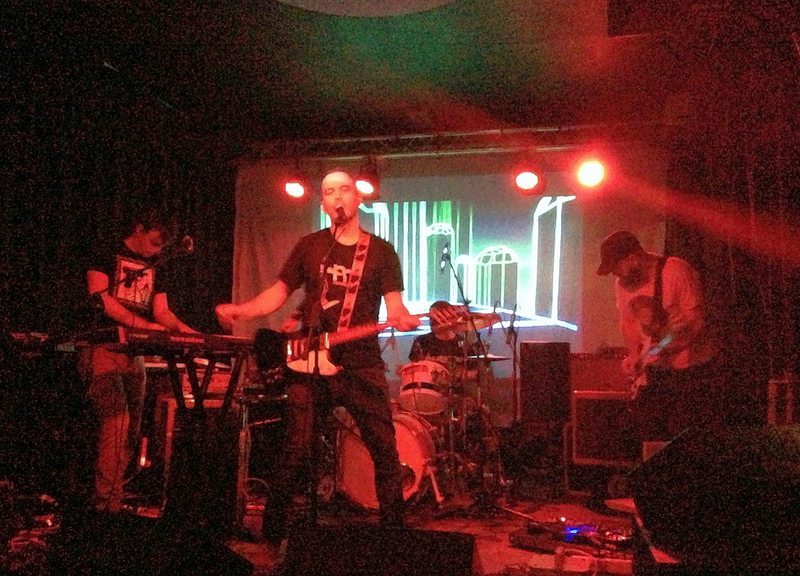 I just about had time to buy yet another pint of Trooper beer then Moon Duo, along with a real human drummer, (in the past I understand that they've played gigs with a drum machine) appeared much to the delight of the packed venue. In fact I've only see The Cluny fuller on one other occasion, when Municipal Waste were playing … but that’s another story.

The ten song set list kicked off with ‘Sleepwalker’, the title track from their latest LP Circles.

What was immediately apparent was that both Yamada and Johnson were happy to forget that the audience actually existed (and possibly each other too). Sanae moves back and forth over the keyboards with her black hair obscuring her face, with her shoulders rising and falling. Ripley, on the other hand, sporting his characteristic silver-flecked beard maintains an aura of tranquillity while he focuses on his feet, which are pushing a multitude of effects pedals and his fingers as they dance up and down the guitar fret.

They sing the ‘Sleepwalker’ chorus together and this great opener had the jam-packed audience all bobbing and jumping their way through the grooves being dished-out. Next is ‘Catch as Catch Can’, a 7'' released back in 2010 with its very simple, very repetitive but very catchy keyboard hook and barely discernible vocals. Another track from Circles follows; ‘I Been Gone’ which is feels like it’s the theme tune to a ride through the desert on a Harley Davidson. I felt the vocals were a lot clearer on this track and there were masses of opportunity for Ripley to open up Moon Duo’s sound with several of shattering turns on the guitar.

It was about this time I became increasingly aware of two things: firstly, you'd be hard pushed to say who the front person actually was as neither person assumes the role hence the name I guess: Duo, and there was a cleverly positioned projector sat just in front of the mixing desk at the back of the venue. This threw out a spectrum of swirling kaleidoscopic patterns while the band played, not only onto the stage but also on the entire crowd too. This definitely helped to complement the songs. 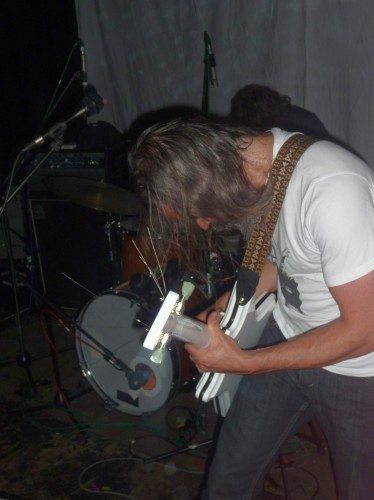 Next up was the foot stomping ‘Free Action’ (again from Circles). This track sounds like it was written whilst brewing a big batch of moonshine somewhere in the Deep South. Moon Duo then visited their 2011 release, Mazes, to play In the Sun before calling in on their 2010 EP, ‘Escape for Motorcycle, I love You’. ‘Goners’, closed the set and after a brief exit they returned to play one more song as the encore, the track ‘Mazes’ then they're gone. No chatter, no conversations or interaction with the audience. However, they’re happy to mingle with the crowd afterwards, shaking hands, taking photos and enjoying the thanks and praise for the great show.

As a live group the overall performance was very understated and straightforward. They limit themselves to brief inflected vocals underpinned by a foundation of repetitive looped electronic hooks. All of this is overlaid by a fuzzy three chord guitar which is warped and deformed through a multitude of effects. The drummer is like a robot mechanically bashing out a cyclical beat with the minimum of fuss. The songs drone into one another making it challenging to discriminate between each tune. This isn't a problem because you end-up with a 75 minute transcendent spiralling reverb heavy mix with infrequent breaks and without any identifiable peaks or troughs. This is in no way tedious or dull rather it’s excitingly compelling. In fact at times it was difficult to believe interstellar panorama came from just three people. Therefore to say one track was better than another is almost missing the point of this particular genre of music.

In summary, Moon Duo didn't put a foot wrong. Strong support from Parastatic complemented their sound very well to make a brilliant gig: excellent sound, excellent visuals, excellent crowd and venue. If you're lucky to see this band live then be prepared to have your mind blown.