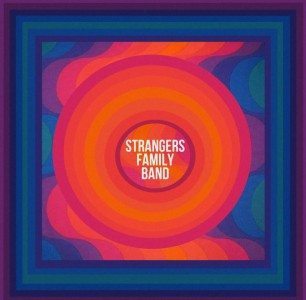 And so the re-revolution continues as yet another psych band sets their controls for the heart of...well, you know where. Only this time it is a little bit different and more rooted in the California sunrise acid of the late 60's rather than this newfangled “new psych” scene. Yes, Strangers Family Band could very well be a throwback to those heady days of Monterey Pop and Fillmore East.

Take ‘Cosmic Wine’ with its phased guitars and spaced out vocals. It's naggingly familiar as visions of the Lizard King tap at your brain. It's hardly a homage though as there is a lot going on here and it is all rather good. Strangely a mix of 90's psych appears now and again giving it a disconcerted feeling.

This is accentuated by the childish drug reference titles of ‘Elle S Dee’ and ‘Mary Jane’ which beg to be ripped from a sixth form stoner's notebook. Fortunately the former works out well and even threatens to go down the Grateful Dead route with it's off kilter jam section. This bodes well for an intriguing live band where the songs could be spread out from their origins.

There is a groove running through this album as ‘Mary Jane’ sways with the best of them and a lysergic thrill is added giving it a rather colourful aspect. Throw in ‘Moonberry Jell Jam’, which could possibly be the best drug ever if it existed, and you have a fairground ride of 60's psych reaching out to grab your mind. Its fun while it lasts and hopefully there will be more.

So not a bad album at all. A little disjointed but some very nice ideas running through it. Once The Strangers Family Band have thrown off some of the more Doorsian tropes and perhaps become a real commune then we could be in for a treat. A welcome addition to a stuffed psych box.