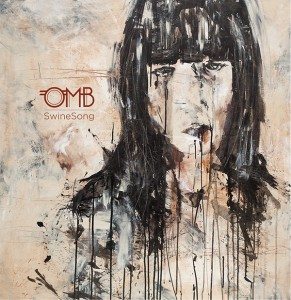 Welcome to the real world! That’s the message that this Israeli band brings out on their self-released debut album, Swine Song. We all know that in these current times a lot of people are getting lost in a world going mad, complete societies kept numb with stupid tv shows, fake mainstream news and feeding the (mostly) young people with wrong ideas about success in life and how to become ‘happy’. Well, these 4 guys from Haifa, talk about other things. Long gone promises, frustration, sex, ADHD and personality disorders, low self-esteem versus delusions of grandeur, love, failures, and the constant need for self-expression – these are the things dreams are really made of.

Omb (pronounced as ‘read’) doesn’t take the easy way with their music, but keeping the above mentioned themes in mind that’s the only true, authentic way. Just ‘read’ their music and you’ll know that musically everything is possible, from folk to prog to avant metal.

Formed in 2009 from the ashes of Black Marbles, a well-respected outfit on the Israeli metal scene, the then three-piece (Or Rozenfeld- bass, Davidavi Dolev-vocals and Yuval Tamir-drums) decided to take a more experimental turn. Originally only aboard as soundengineer, guitarist Yuval Kramer (Amaseffer, Reign of the Architect) became recently a full member of the band. With further help from Jens Bogren’s (Fascination Street Studios) on mixing and mastering ‘Swine Song’ is one of those albums that requires your full attention.

The ten tracks on this remarkable debut show all kind of emotions, from tender acoustic parts to brute, aggressive pieces. The prominent role however is fulfilled by the diverse vocals, Davidavi Dolev voice translates the overall madness one can experience during a personal trip to the darker side of the soul. From creepy, hysterical to seducing sensitive, from clean vocals to deep grunts Davidavi has it all. Somehow the tracks remind me of Daniel Gildenlow and his Pain Of Salvation, but if you want some more references I would mention Faith No More (with Mike Patton) and The Mars Volta (Cedric Bixler-Zavala). The most weirdish vocal parts, when Davidavi seems to be telling a story, even hints to Roger Chapman from the seventies.

The musical exploration here is challenging, despite Swine Song being their debut it sounds like they have done this for ages. Infused with all kinds of instruments, strings, trumpet, sitar (or something sounding like it) and accordion the band has created a sometimes dense but at least fascinating mix of styles. There is even a short disco beat on ‘Oh Mrs Wade! You shouldn’t have!’.

Bottomline: Omb can be proud on their work and although the album requires a very open mind I’m sure this one will harvest quite some followers. It would be great to see these guys on the international stage. For me, Swine Song will be for sure on my top 10 list of 2013. Check them out yourself at Bandcamp.