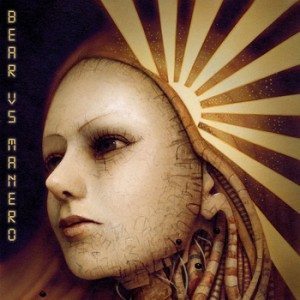 If you don't like this EP then there's something profoundly wrong with you; the energy distilled into these four songs by London/Medway based Bear vs Manero is intoxicating and a reminder of how uniquely visceral and inspirational music can be. The effect is a raucous rallying cry which renders all that is bland even more repellent. The sense throughout is schizophrenic with the mood oscillating between violent and clever, cynical and punishing while in the background the mercury rises, the clock ticks and some catastrophe looms; it's the sonic equivalent of Walter White.

Once while playing in an under 15's football cup final, one of my team-mates succumbed to nerves, rushed off the pitch and pissed on an electric fence. His shrieks pierced ear drums for miles and reduced both sides, the few dozen spectators and even the referee, to hysteric convulsions which became acutely perilous when he staggered back onto the pitch like a pissed-up gibbon, only to immediately take a ball full-force in the nuts. Such rare cosmic alignments induce a kind of delirium that would be impossible to sustain. This EP - recorded and mixed by Tim Cedar of Part Chimp fame - is of that ilk; it's a glorious confluence which defies explanation, which is truly greater than the sum of its parts. A rare instance of joyous serenity, but of the type induced by really good acid rather than the attainment of Om through ascetic sacrifice.

It explodes from the off with shocking velocity; opening track ‘Fluoride Frustration Face’ has the impact of an orgasm at a funeral. “Clive? Are you awake? It's time for breakfast” is the kind of sentence generic Daily-Mail-reading-Linda utters as she dutifully pours a cup of tea in some suburban hell on Monday morning. Yet Bear vs Manero manage to imbue this line with a psychotic menace that defines the EP itself. Toms' vocals switch between jaunty admonition and satanic delirium while the music itself combines a thundering bass riff with a shrieking guitar pitch; it’s a truly unique maelstrom that just really fucking hammers it.

‘Discordia 2.0’ is equally forceful; the punishing riff has an unrelenting whip-like quality which periodically explodes into a flurry of death-wails and thundering crashes. The combination of the scornful vocals and teasing riff conjures images of cruel overlords in the Merciless Ming vein toying with the fate of their underlings, though the lyrics paradoxically implore the listener to “obey your Goddess”.

On the Radio-friendly-titled ‘Thor's Super Sweet Sixteen Party’ an addictive chaos again reigns as the music stirs up a frenzied tumult for Toms to harness. A pulsating vigour infused with a kind of lunacy charges forth and while it's difficult to know what this is all about it’s delivered in a tight, frenetic fashion that obviates the need for any explanation.

‘Budd’ tells a story which, if delivered in a different fashion, could be deemed innocuous. Yet Bear vs Manero manage to make the tale of Budd's day bristle with a sense of tension; it has that same uneasy atmosphere of impending calamity that's so powerful in Gus van Sant's film ‘Elephant’. Budd's not going to take it anymore and something is going to snap. Outraged headlines about the archetypal ‘quite kid’ who turned on his community seem inevitable. It's a powerful, controlled finale.

This is an utterly brilliant EP, equally inspirational and thunderous and free from any sense of contrivance or quest for mainstream acceptance; this honesty imbues Bear vs Manero with an energy and a sound that defies classification but epitomises all that is good about music and which, ironically, gives them potentially mass appeal. Indeed, if there's any justice they will be in rehab in two years time reflecting on their precipitous rise to fame and fortune. Help them get there; it's the best £3 you'll ever spend.