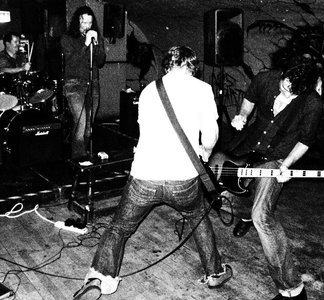 Our reviewer Aidan Hehir described Repo Man's debut album 'All Mind in the Cat House' as "caustic, aggressive and infused with a 'we don't give a shit if you don't like this' mentality", so we figured they must be a pretty cheerful bunch to talk to. At any rate, as one of the best new bands we've discovered this year, they were prime for the Echoes of the Future treatment...

Ant: I met Paul and Liam through Bristol Cube Cinema's Improvisatory Orchestra. Bojak I've known for about 12 years from when we lived in Worcester. The original lineup had our friend Rob on guitar and Liam was on drums but Rob decided not to move from London to Bristol, so we got Paul in and Liam moved on to guitar.

Liam: The band started out in July 2011 with our friend Rob Kent on guitar and me on drums.  Early material was entirely improvised, so the sound was quite different to how it is now.  I didn't meet Rob and Bojak until the first session.

Ant: The mission statement was 'Repo Man is always intense'. We wanted to produce what we weren't finding in other new bands at the time, maximum intensity with a full-on vocal without it slotting easily into 'punk' 'metal' or whatever other rock subgenre, and without hollow scenester posing.

Paul: I guess The Cube should take responsibility for that.

Bojak: Rhyming couplets interspersed with prosaic scatological misanthropy, a wedge of lime is then wrapped around the end a stethoscope, which is then inserted (with benign contempt) down an obliging urethra .

Liam: Bristol has a thriving DIY culture so that has probably influenced the way we've approached things, but I wouldn't say we're part of any specific scene.  We've tended to do our own thing.  We've been fortunate to find a few promoters willing to let us curate our own lineups and that's worked well for us as that way people tend come along for the whole night rather than just to see one band.

Ant: Bristol's a pretty open-minded place musically and it is inspiring to see local artists receive attention. I don’t think we're a part of 'the' scene...

Bojak: Not that we don't enjoy the music but there does appear to be a stapled stagnant stigma to the overall ethos, almost regimented/ regime...

Ant: The fact that 3 of us all met through an Improvising Orchestra that welcomes people of all or no ability though is testament to something great about Bristol that you don't get in a lot of other cities. None of us are native to the city; we're one part North West, two parts Midlands and one part Sussex.

(((o))): You’ve just had your new album out.  What can you tell us about that?  How is it a progression from your previous work?

Liam: We went into the studio thinking we'd maybe manage to get down 4 or 5 tracks and ended up with 8, so that was quite a result!  We weren't hell-bent on making an album though. It’s important to record while things are still fresh.  You can definitely leave it too long, and then tracks start to get stale and irrelevant.

Ant: In our earliest days Liam was on drums rather than guitar so the sound was different in that respect as he has a different style to Paul. Some of the songs on the album were in embryonic form even then though. The album is our first recording so it's our initial statement and culmination of the early material. We had to get the songs down as we'd had them for awhile and were already working on a new crop, so the 'progression' is more with the new stuff that isn't on the album. The album was recorded in two days with a day and a half of mixing so we had to try and get the best results within a very short time frame. Ironically it actually sounds more polished than intended!

Ant: The fact that there is more bands than ever before vying for attention with no filtration system means there is a lot of great stuff that falls between the cracks and a lot of the stuff that does get attention nationally seems to be through some kind of nepotism. Also, working full time jobs that some of us hate...

Bojak: It keeps us grounded.

Ant: There's a weird irony in the fact that we are in the era where exposure to all types of music is available so easily with tons of great, mad stuff out there but the actual mainstream of culture has reacted to that by becoming perhaps the blandest it's ever been, with little in the way of interesting stuff managing to 'invade' it like would happen in past decades.

(((o))): Every band has different aims.  What would have to happen for Repo Man to make you feel that you’d “made it”, so to speak?

Ant: Being able to devote the bulk of our time to the band rather than work. Having a fanbase in a few cities would be nice. The point is you can never 'make it' as that would spell complacency

((o))): You’re given the opportunity to create your own All Tomorrow’s Parties Festival.  What would be the first five bands on your list?
Liam: Don Caballero (mid 90s lineup), Fly Pan Am, Philip Jeck, Pete Swanson, Prefuse 73.

Ant: Fugazi, Autechre, Ornette Coleman, Mission of Burma and seeing as every fucker is reforming I'd try for Husker Du though can’t see em going for that

(((o))): What are the band’s plans for the near future?  Thanks!
Liam: More out-of-town gigs, more releases, hopefully some festivals and touring at some point!