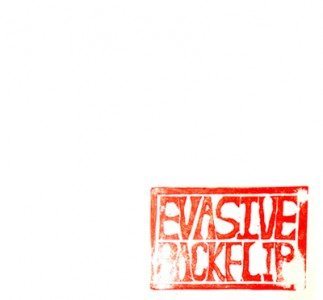 For all the ambiguity/slipperiness/ninja escape manoeuvres implied by their name, Evasive Backflip really don’t fuck around.  They formed in December last year, and by July they’d released their first EP. Their Bandcamp page invites you to go see them live (“our performances have a lot of energy”) so it’s clear they’ve been gigging for a while, too. Not to mention their tracks: short and to-the-point, no-nonsense (but plenty nonsensical) hard-hitters with all the conviction of a much more seasoned band.

It’s called EP #1, appropriately enough – although for all the whacky territory and loopy lyrics EP #1 encompasses, you’d have thought they might have come up with something a little more reflective of the content. Then again, perhaps their name really does say it all, because these five tracks backflip all over the place.

The first track’s called ‘Welcome to Evasive Backflip’. Thanks, guys. Charmed, I’m sure. How could I not be, with such a pleasant one-minute-eight-seconds of xylophonic improvisation to relax with? It’s the kind of music you hear stretched out on a yoga mat in an all-white room, breathing from your Centre while a husky female voice talks about your chakra. Or in a golden mirrored elevator with a fine uniformed attendant, riding gently up forever –

– when suddenly the doors open onto ‘Hideaki Kobayashi’ and BAM! – it’s the first backflip. With a unison battlecry of "ichi, ni, san, shi!" we’re in Japanese noise-pop-rock-land, with Deerhoof delirium, punchy riffs and driving drums. There’s no lyrics at all, just a recurrent ba-ba-ba-ba-ba-ba-ba-babbidah which lapses into a la-la-la variant as the song comes back for air and gentles out (sort of) for the final thirty seconds.

Google is completely unhelpful on the subject of Hideyaki Kobayashi. Perhaps it’s a friend of theirs? But the alternative spelling – Hideaki Kobayashi – turns up someone far too intriguing to ignore, and plenty batty enough to posit as a tentative muse for this song. For the uninitiated, Hideaki Kobayashi is a tiny, bewhiskered software-engineer-turned-internet-sensation who likes to dress up as a schoolgirl. Braided beribboned beard and all (go on, google him. He’s cuter than that sneezing baby panda). There was so much fuss that collector-of-ironic-oddities VICE did a two-part film on him, which came out about a month before EP #1 was released. Total coincidence? Perhaps, but the schoolgirl falsetto and sheer kookiness in this track suggest, well, perhaps not.

Another backflip and we’re in ‘Hot Shit/Cold Piss’ – a half-spoken half-sung punky number with insistent guitars, sizzling cymbals, and the first lyrics we’ve heard so far. It’s another take on the You Think You’re So Great But Actually You’re Not song, which I have decided is Definitely A Thing (think Jens Lekman’s ‘Pretty Shoes’, Shania Twain’s (ulp) ‘Don’t Impress Me Much’ (Carly Simon's 'You're So Vain'? - Ed)...) This variant runs along the lines of: “Think you’re hot shit, but you’re coooooold piss / Think you’re a hot dog: you’re nothing but small fry / Think you’re tall, boy, but you’re actually a pretty short guy” – and my all-time favourite, “Think you’re a Diet Coke but you’re not even actually a drink”. Listen out for some witheringly good glissy guitar licks after the first chorus. Then, after a few minutes of tight, told-you-so rhythmic sass, the song collapses into splintering glissandos, shooting springs off everywhere like a cuckoo clock apocalypse.

Flip! Now we’re down a sewer. Track 4 tells the story of falling down a drain and then "Alligatorrrrrrs!" Cool, funk-driven and wordy, this is the song where I really wanted some lyrics to read along with. Alas, I couldn’t find any. Hopefully they’ll remedy this in time for their next release. There’s echoes of Primus in this one, some smooth Morphine undertones and that distinct 90s sensibility that pervades quite a lot of this EP.

For a band that claims most of their songs “are meant to vividly narrate and animate a story” EP #1 is surprisingly short on words, as the final track, too, has none. The song starts with a Battles-ish bloody-mindedness, a manic bass competing with an emphatic guitar line. The guitar theme repeats and embellishes, getting slurrier and more inebriated as the song progresses, finally subsiding into absinthe dreams. A wonky waltz to be sure, but a battle cry, you ask? That’s tucked away in the last sleepiest moments, of course – right where it should be. If there’s one thing this band do extra-especially well, it’s surprise endings.

EP #1 left me wanting two things from Evasive Backflip (aside from the lyrics): a music video, and a full-length album. Such a fantastically eclectic style deserves elaboration, both on the musical and visual fronts. After this supremely calculated (and caffeinated) debut I’d be very surprised if both don’t come out in another improbably short space of time. But in the meantime, you could do much worse with fifteen minutes than check this little firecracker out.