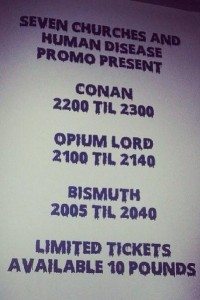 Tonight’s press money at the Black Heart all goes to charidee which is cool but unfortunately the world has been less charitable to Croydon headbangers Slabdragger who have had to cancel their appearance at tonight’s show. Bismuth are still hanging together though and open the show with their two person assault on planet earth.

The duo formed of Tanya on bass and drummer Joe omit 35 minutes of rigorous amplifier testing drone. It’s bleak music that conjures up the wettest, darkest times you can imagine – they sound like they could make mud boil. They start with The Eternal Marshes and it feels like a test of endurance from start to finish as low frequencies throb and Tanya screams in the shadows. Their second and last song opens up some space in their punishing sound but it’s all relative.

The lurching, punk infused heavosity of Opium Lord comes next and it’s always reassuring to hear a midlands accent at a metal gig such is the region’s pedigree in these circles. There’s no backdrop or fancy lights onstage just riff after malevolent riff and amiable banter as they dedicate a song to “Andy, from Sussex. Whoever you are.” There’s a big crowd in for the Lords tonight and Nathan Coyle delves into the throng to scream out the anthems of filthy low slung doom with added snarling, rasping hardcore from their current EP The Calendrical Cycle – Prologue: The Healer to universal acclaim.

The filthy heat that accompanies these gigs begins to rise with the smell of armpits and beer clinging to every surface as Conan’s Tubular Bells intro tape starts and the Liverpudlians cram onto the Black Heart’s stage. Hawk as Weapon from last year’s immense Monnos album starts the show laying down a thick carpet of noise.

My vantage point from the back of the room is quickly obscured by numerous invisible oranges and the floor moves, this time not purely from PA vibrations but from stamping feet. Conan inspire belief from their fans such is their mastery of the contours of a heavy riff but it’s not just that, singer Jon Davis has something of the Ozzy factor about him. His voice is desolate but communicative not the usual shout in the distance. They reach into their back catalogue for some slow, gnarly sludge before introducing us to two new songs from their forthcoming record and these suggest that they will continue their rich vein of recorded form. Live, Conan really are something special and prove it tonight; they seem to be able to wring excitement from this kind of music that others simply can’t and that’s no mean feat.