There are festivals and then there are festivals like Liverpool Psych Fest. Situated in the Victorian surroundings of the old dock buildings which used to bustle with such life back when Liverpool was top of the game for ship building, the area has now been utilised for creativity and forms the perfect hub for a festival on psychedelic sub-culture. It may not be unique in that there are plenty more festivals that use such spaces but I seriously doubt there are many which transport you to another world for the entirety of your stay. 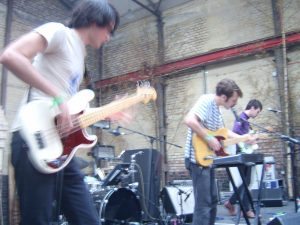 Having arrived somewhat late to the party on Saturday afternoon, there are already plenty of spaced out faces mumbling on about how Moon Duo changed their life and the happy eyes of the punters reflected a festival in full swing. So time to dive in then and witness this thing called psych.

Starting off in the Furnace room which uses a massive Victorian chimney as the stage backdrop, Alien Ballroom look like they are having fun up there playing to a rather indifferent crowd. Their retro Nuggets psych is enjoyable if a little lost at this time of day and the swirling organs and wayward vocals struggle to make an impact.

This is not true of The Woken Trees who are causing a sound riot on the Camp stage. A much darker room than Furnace at this time of day due to lack of windows, the walls are crawling with oil lighting creating a much needed ambiance. Woken Trees music mixes in the post punk of Wire with the drone of Swans turned up to highest volume. Indeed, it is that loud that you feel every bone in your body rattling.

Utilising black and white found footage of 1950's scenes with a memorable image of a deer repeatedly jumping over a fence, it's all rather frightening for 2:30 in the afternoon. It's utterly stimulating as well and sets the par for the rest of the day. Well worth checking out if you get the chance, just remember your ear plugs. 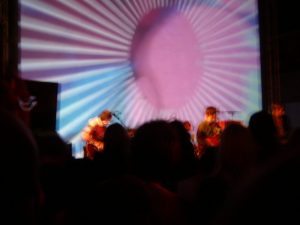 The next couple of hours are taken up between Alfa 9 who are uninspiring, Novella who bring bubblegum psych and Lola Colt who were frankly, quite scary. It does provide ample time to explore the surroundings of the venue and stumble across the infamous room of “moving wallpaper”, a stunning and totally out there experience which resulted in people just sitting staring at psychedelic wallpaper and giggling...you don't get that in V Festival!

“Moving wallpaper” aside, there are plenty of bars and food stalls and also a record store giving the festival the overall feeling of being run pretty perfectly. None of your cheap stuff here either and I wholly recommend the wonderful chilli thing that I ate if you venture there next year.

A trip down to the other venue, Blade, to see Psyence results in minor disappointment as their promise of Tame Impala crossed with Primal Scream Xtrmntr fails to materialise. Instead the pull of Maston seems strong and must be so for every other journalist and cameraman there. It's a case of too much promise though as their music fails to catch light. Maybe it's the cavernous surroundings of Furnace with the light bleeding in from the windows in the roof that prevent it from taking off but something doesn't quite work.

The same can't be said for the events that unfurl in Camp a little while later. Either due to the trippy surroundings or the fact that people are just starting to wake up, The Lucid Dream take things to a completely different level. Their Spacemen 3 style wig outs mix in with a large dose of attitude entrancing a crowd into mesmeric hypnosis. To put simply, they are stunning and seems to push a psychedelic switch as the music gets louder (I mean, REALLY loud!) and the oil visuals start bleeding down the walls. It's fast, hypnotic and completely thrilling and when they announce their last song by saying “it's a long one” you knew you was in for a treat. Catch this band if you can, if there is a crossover into mainstream then The Lucid Dream may just lead the charge. 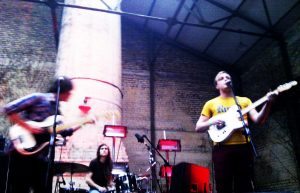 From now on it seems like every band is trying to outdo each other with The Paperhead and Charlie Boyer and the Voyeurs upping the ante. The Paperhead delve into hypnotic melodies with more than a hint of early Pink Floyd about them. Their music enlightens Furnace as the room begins to dim with the setting sun. It's no wonder there were murmurings of Pompeii as the liquid music ushered in the evening. Trance like and dance like and totally original.

Boyer on the other hand manages to bring some sex allure to Psych Fest. Suave, clean and verging on the side of pop pastiche things don't look too good but then something happens about halfway through the set that suddenly brings the room to light. A mass of seething bodies dance to the almost gallic charm of Boyer and co and they easily sweep the crowd into the palm of their hands and give them the trip they so want.

Things start to get more than a little strange now as the alcohol starts to kick in and disorientation sets in. It is tribute to the set up of the festival that you never ever feel threatened even when you lose all your friends. You find yourself watching bands and forgetting what they are called halfway through as the music takes over and fellow fans hug and smile with joy. It may just have been The Liminanas doing this but we'll never know.

One thing we do know is that Fuzz are on soon. Fuzz are my favourite band of the moment with Ty Segall being one of my heroes. To watch the entire set from the photopit just yards away from the band was an absolute honour and one of the most mindblowing things I have ever witnessed. 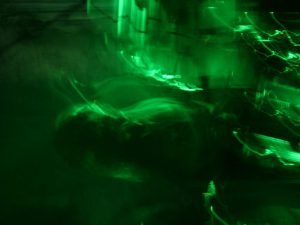 By now the music has been turned up to extra loud and Astronomy Domine introduces the band in all their glory. A sea of people wait expectantly and then when the riffs crash in you know you are in manna. Ty Segall is ferocious on the drums as he screams out the words to Sleigh Ride and What's in Your Head. Heads bop in unison as the yellow lighting sweeps up the furnace backdrop like it's the seventh room of hell. Breathless, invigorating and marvelous, I sat in awe through the entire set (apologies for losing objectivity there but they really were THAT good).

After this the night collapsed into a miasma of noise and lights as we wonder from stage to stage chasing the music. Late stage times meant that Hookworms were to be seen which was an added bonus whilst Mugstar may very well have been the final cause of the headache that was starting to be induced. Whatever it was, (plus the need to get home) it was rather unfortunate that Clinic were not seen.

At any other festival this would have been disappointing but the magic of Liverpool Psych Fest is that it isn't about any singular band. Instead this is a festival which aims to fully immerse you in psych and deliver sensory overload for the time you are there. It is brilliant, frightening, beautiful, ecstatic, worrying and above all, one of the best festivals I have ever attended. Do yourselves a favour and attend next year, it's intense but my god, it's magical.