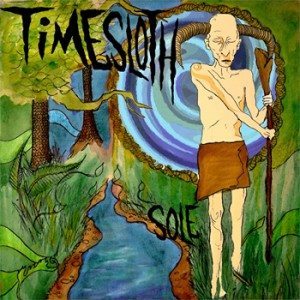 So last year I 'reviewed' an earlier release by Timesloth where I may have been a touch harsh and dismissive. It wasn't published, and that's probably for the best. Well - they're back.

And I'm going to get this out of the way right now - he still can't sing. Growl? Good. Scream? Markedly improved. Singing? Flat and atonal. I unreservedly doff my hat for a lack of autotune (because that is the devil's work), but I feel that a low spoken word style would sit better in those parts than falling off the note. Anyway, let's get to the good stuff!

They have definitely gotten better (phew!). Production is better, songs are better, playing is better and even their phrasing is better. You can hear the start of a band finding their sound, rather than just emulating their favourite acts for 12 bars at a time. Track 2 'A Long While' was the standout for me - it's the closest thing to a highlight track with a decent mix and some straight down the line songwriting that works.

I feel a little bit like I'm kicking a puppy writing this - I can hear the passion and enthusiasm come through clearly in the music, but at the same time the 'jaded asshole' in me wants better musicianship. I feel that 3 of the 4 tracks could be polished enough to be released again, but there's work that needs to be done.

But you know what? Ignore me guys - don't give up. You're our new frontline troops in the war against apathy, shit music, top 40 crap and everything else that makes me shake my fist at the sky. You're actually doing it - you're an American band on a British website being reviewed by an Australian... Welcome to the global village. The fact that you have the desire to put this out into the world and hear feedback is great. I applaud your enthusiasm and desire to make music.