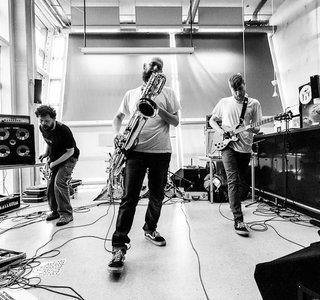 If you read my review of Incubate Festival earlier this year you will have noticed that I was blown away by Dutch instrumental noise rockers Mannheim...so now here they are in the Echoes of the Future column for you to check out as well. Highly recommended for fans of everything from And So I Watch You from Afar to Breach, from Fire! to Shellac.

(((o))): So, first and foremost, who are Mannheim and what are your musical backgrounds?

Most of us have been playing in bands their whole lives. Mark, Otto and Jochem have been playing together for some time now, experimenting around in different formations. Mannheim was formed early in 2012. We immediately started to write the music for Super-Empowered.

Mark: Not so much actually.. Our local scene is really great and we see a lot of talented people doing very creative things. With Mannheim though, we’ve never really tried to fit into a scene. We’re just not that band I guess.

Otto: Then again there are a lot of great people in our local scene who have showed us a lot of support and have helped us to start out as a band

(((o))): Your debut album came out earlier this year. What can you tell us about that?

Mark: From the start, the album has been our main focus. We wanted to make an album that wouldn’t just sound like a demo or ‘first EP’. We put a lot of time and effort in the production value. We decided to work together with producer Rene Rutten (The Gathering) which definitely helped us bringing the album to a higher level. As for the song writing itself, it took us a year to write all the songs and to make all the pre productions.

Otto: To be honest, I think the end product is pretty unique.

(((o))): I’m curious about the inclusion of saxophone in your music, because it works really well and doesn’t sound forced at all. Is the music written around the sax parts, or are they added into songs that the rest of the band have already worked on?

Mark: For a lot of the songs I made the rough versions at home. I tend to fill things up without much room for a designated saxophone part. Otto handles this really well by always trying to complement the overall sound instead of creating his own little spot in a song. On the other hand, we have a song called ‘The Filth’ which started out on saxophone. It’s like the saxophone part is the main guitar riff.

In the end we’re not crazy skilled musicians, we’re not bothered by too many rules how music “should be done”. That gives us more freedom to focus on the overall sound and impact I think.

(((o))): I was blown away by your set at Incubate Festival earlier this year. Who were your highlights from that weekend?

Mark: I barely had the chance to check out the other bands. I did catch a glimpse of Sex Jams. Cool Band. I hate that I had to miss out on Mylets.

Otto: There are tons of bands out there that make decent music but there is only that much room to make an impression on your potential listeners.  Nobody is looking for you so you have to reach out to them A LOT.  Musicians are not sales people so there is a real challenge there. Being findable is one thing, being found is another.

Mark: I think you always need to be on the move, you can’t afford to sit still. You can’t expect anyone to do something for you.

(((o))): Every band has different aims. What would have to happen for Mannheim to make you feel that you’d “made it”, so to speak?

Mark: I always wanted to make an album. Now that we have an album I want to make another one. It never ends. I don’t think I’ll ever make it!

Otto: “Making it” isn’t really a goal. Goals are more practical like playing a certain festival or touring in a certain place. I hope I never “make it”. It must feel like a huge void to know that you’ve made it.

(((o))): You’re given the opportunity to curate your own All Tomorrow’s Parties Festival. What would be the first five bands on your list?

Mark: Oh boy.. Ok fast and random:  And So I Watch You From Afar, Deafheaven, Mylets, Fuck Buttons, Deerhoof

(((o))): Are there any upcoming bands you’d like us to feature soon?

Mark: Next year we want to focus more on Europe instead of just NL and we’ll definitely start working on a follow up for Super-Empowered.