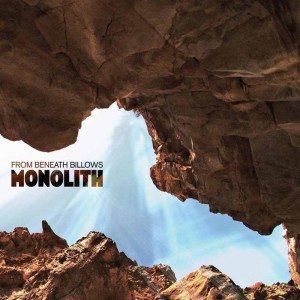 I have to admit that I didn't know about the existence of From Beneath Billows before finding their new album in my inbox. Discovering new music is always cool and what I like the most is trying to understand what is behind the music. Listening to an album is the final act of a long process where artists put themselves, their stories and visions with the goal to of course please our ears but especially to express their inner passions and feelings. Since an album is not only a mere track-list I started diving into From Beneath Billows's musical world from the beginning and with immense pleasure I discovered a talented band that have put all their devotion in creating their own music and the outcome is a sound that will please in particular sludge and post-metal lovers.

From Beneath Billows is a Norway-based band founded in Oslo in 2005 and from that year to date they never stopped working. In 2006 they released their first album Evolve and with the desire to advance their creative process they spent a lot of time on mixing and working on detailing the layers.

And so Monolith was born.

My journey through their musical world started from Evolve and already from my first listening of Monolith I recognized that these guys have taken a big step ahead. And I love it when a passion for something keeps people pushing them forwards. That's why I like the project of Lars Kristian Jagtøyen, Øyvind Daaland Lesjø, Lars Sundsbø, Lars-Petter Strand and Bjørnar Børja that goes under the name of From Beneath Billows.

So, Monolith is the follow-up to their previous album Evolve and demonstrates an evolution from this previous album. As soon as you'll press play you'll notice a sound that is much deeper and heavier.

'One Death And The King' is the opening song and the chords at the beginning create a tension and suspense that I really like. In a couple of seconds the soft acoustic guitar change the atmosphere bringing some light to the dark intro. Clear and melodic vocals, drum beats and guitar riffs are the undisputed protagonists of this song before dissolving again in the acoustic sound of the beginning.

The first song already is the sign that we have to keep an eye on these guys.

'Verity' has more or less the same structure of the previous track but it appears darker and heavier to me. And that's not a bad thing at all. Something happens with 'Darkens The Will' that is so damn superb. The song stands in between post-rock and metal music but apart from the music genre it has an incredible intensity and it's like if we are experiencing a wonderful crescendo from the first song till here, the aimed peak. The song 'Frontier' is much heavier than the rest of the album, whereas  'Enlivened and Sworn' is much quieter and darker, thereby  bringing the sternest, coldest heart to the brink of tears.

'Monolith' has the honour to conclude the musical journey of From Beneath Billows with a soft intro of acoustic and clean guitar playing before leaving the stage to well crafted post-rock elements. This calm session is only an illusion but it will come back after a wall of sound where heavy guitar riffs and aggressive screams dominate the scene. The end is again soft, it is clean, it is brilliant. 'Monolith' is the summit of the album, with its excellent catchy vocal, guitar work and quirky style of music.

Monolith is an album full of feelings and it is a perfect blend of sludge and post-metal. It is the undeniable proof of the talent these guys have and the big step ahead they made in their musical path.

Even if Monolith is the summit of From Beneath Billows's career I want to look at it as a trampoline towards something even better.