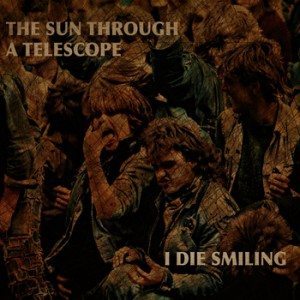 The Sun Through a Telescope

Out now through Bandcamp and Dwyer Records (Cassette)

After releasing a couple of cassettes, this one-man-DIY-dark ambient-drone-metal project from Ottawa, ON, Canada has now released his first full fledged album that is available on CD as well.

The man behind the morbid entitled project The Sun Through a Telescope is Leigh Newton (aka Lee Neutron), a multi-instrumentalist with an evident love for disturbing music. If you’re looking for safety don’t knock at the door of this guy. I mean, if you look too long at the sun (even without telescope) you will be blind but on the other hand, if you listen to metal music only you might become deaf but surely become ‘blind’ for other genres as well. Even the album cover tells this message somehow.

The first 3 tracks though will still please the metalheads as they feature heavy distorted riffs, screaming and shrieking vocals and even some wide-spreading chords (‘You Can’t Kill Me’), think about the style of Devin Townsend. But then Leigh draws you in his bleak abyss with ‘I Die Smiling’, a dark piece with ambient soundscapes and a weird vocal part with explicit lyrics about the expectations of a certain group of listeners “…SAILED ON A SEA OF TEARS CRIED FROM THE EYES OF ONE MILLION DISAPPOINTED METALHEADS….. NOTHING WILL EVER BE BRUTAL AGAIN”. The rest of the music turns now into a doomy atmosphere drenched in sustained and eventually slowly fading notes.

The sprawling epic ‘Werewolf Weather’ (21 minutes!) is a slow, dragging piece that starts with ambient and electronic processed noises but develops itself to an experimental intermediate section where lamenting vocals accompany sustained synths and even sounds of birds. The metal riffs, together with the soaring voices, return only for a short while. You have by now definitely arrived in the realms of the tormented souls as long drones alternate with outburst of decay and pain. Leigh has got you in his stranglehold and there is absolutely no way to escape out of this cruel horror.

The last three tracks are a little bit easier to digest but still are disquieting, dark soundscapes giving you an imprisoned, numb feeling. ‘It, Still’ reminds me of Kreng, the Belgian theatrical project led by Pepijn Caudron. It has that same cinematic, nightmarish atmosphere. The guitars return briefly in ‘The Bitten’ but the cardinal point in this piece are the spacy, floating synths over which you can hear the sounds of children playing. The last track ‘It’s cold but I’m warm’ starts with a long silence from which a sustained space sound emerges accompanied by once more the sound of birds. This calm piece is definitely the most introspective track and a very fitting one to close off this intriguing album.

The Sun Through a Telescope is another DIY project to watch out for if you’re in to something different. For me it shows once again that there is a vast pool of creative musicians that don’t need anything but a nicely equipped dungeon (with ‘Buddha Machines’?) and the world wide web to share their creations with us. And of course some people like the writers here on Ech(((o)))es and Dust that help to spread the word. 😉

Now available on CD from Mutants of Monsters Records and on cassette from Dwyer Records, or streaming/downloading on Bandcamp.