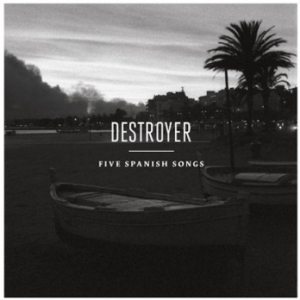 Out now via Dead Oceans

It’s not hyperbolic to describe Daniel Bejar, the man behind Destroyer, as one of the greatest songwriters of the modern age. He may not have garnered the success he deserves, but one senses that success has never been high on Bejar’s agenda. Destroyer feels less like a ‘project’ than it does a necessary extension of his personality, which is one reason the announcement of Five Spanish Songs didn’t exactly come as a surprise.

For, whilst Bejar is Canadian, it somehow felt perfectly natural to hear that Five Spanish Songs would be a literal title. One wouldn’t be wholly surprised to hear Bejar burst into Spanish in conversation so why should one be shocked to hear him getting through an entire EP in that language? That’s what he does here, presenting five songs written by Antonio Luque (of Seville based Sr. Chinarro) in a style musically reminiscent of that he adopted on classic mid-period Destroyer records like Streethawk: A Seduction and Destroyer’s Rubies.

The first track, ‘Maria de las nieves’ is the most successful. It’s classic Bejar in many a sense. The arrangement is uncomplicated but ever so slightly askew, as if designed to capture the sound of a band nearing the end of a long rehearsal session, a few drinks downed along the way. Vocally is where it really hits home though. Bejar’s distinctive voice is to credit for many of his finest moments. Here his enunciation of the song’s title during the chorus is to die for. It perfectly captures the effortlessly wistful laziness that has always marked out his delivery from his contemporaries.

Bejar’s distinctive vocals are, in fact, what carries this EP. There’s nothing ostensibly wrong with any of the tracks here, but it’s a shame that we’ve been robbed of Bejar’s wordplay for this release. His lyrics have always been so multi-dimensionally cathartic that to hear his voice singing in a foreign tongue feels, if not wrong, then inevitably disappointing. Furthermore, given that Kaputt achieved the perfect synthesis between the musical and lyrical potentials of Destroyer’s sound, it’s hard not to see Five Spanish Songs as a slightly contradictory next step.

Thus, whilst this is essential for Destroyer fans on the basis of the novelty value of its direction alone, it’s hard not to feel like Five Spanish Songs is just a sidestep on Bejar’s journey towards ever greater heights on his next original full-length.