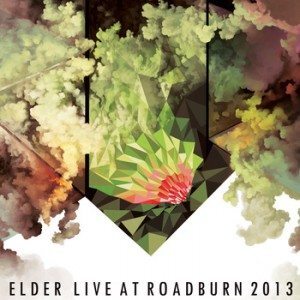 “Blazing”, “The Next Level”, “Riff driven excellence”, “Cosmic melodies”, just some impressions that can be found in numerous reviews of the 2nd album Dead Roots Stirring (2011) from Boston-based Elder. So that already indicates that we have to deal with a very talented, young stoner-doom outfit here. Dead Roots Stirring was for me indeed a nice step further after their somewhat adrift debut Elder from 2009.

Now the power-trio is back with a live release recorded earlier this year at their stint on the famous Roadburn Festival in Tilburg, The Netherlands, which was their first time in Europe. For many visitors they were among the highlights of the festival so it was a wise step to use the recordings (mixed and mastered by Marcel van de Vondervoort) for a digital release on Bandcamp (available now as name your price download), but even a physical release (CD and LP) is to be expected in February 2014 through Burning World Records.

After listening to a lot of ‘music for the head’ lately (progressive rock, experimental and avant-garde music etc.) this is a very warm return to the physical body, experiencing the more earthlier energy of the deep, groovy and muddy stoner rock sound. Evidently, the focus of the gig was pointed to their most recent Dead Roots Stirring release featuring four out of five tracks. With the addition of one track from their 2012 Spires Burn/Release EP and one track (the awe-inspiring 'Riddle of Steel pt.1'), from their debut album, Live At Roadburn 2013 is more then just a great introduction for all those not already familiar with this band. This electrifying live set (you can almost feel the sweat coming of the walls!) has absolutely much more to offer than just being a kind of compilation.

With only one track below the 10 minutes mark you know you’re in for a treat: an hour filled with colossal doomy jams. The rhythm section: Jack Donovan on bass and  Matthew Couto on drums, lay down the groove for mesmerising riffs and psychedelic solo’s by guitarist Nicholas DiSalvo. And what’s more, within these instrumental wizardry there is actually a lot of melody which is often a problem in this kind of music. The trio really manages to  enhance the original studio tracks, even the vocals of Nicholas sound much better to me.

Bottomline: Elder delivered a stunning performance here that could be the final breakthrough of this band in the scene. Very recommended.