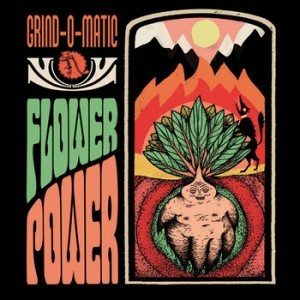 I got asked to review a band called Grind-O-Matic and being as immature as we all know, I did find the name mildly amusing. However, the music was no laughing matter.

To give you a bit of background, Grind-O-Matic is a French grindcore band based in in Paris. They’ve been around since 2003, releasing their very own brand of grindcore upon the world, with hints of death metal, but it’s all blended together to give them a superb sound and tone. Their 3rd release is called Flower Power. Based on past releases one could say they’re a bit of shenanigans grindcore band, much like Birdflesh.

It’s safe to say that they definitely do not fuck around when it comes to making incredibly fast, abrasive grindcore. The record has its own nuances that make it something special, one of which comes in the form of sound clips that are quite fitting for the mood the record puts you in. As you travel at the speed of a turbocharged meat grinder, you’re pegged back to reality by these very sound clips, before this shit storm goes full tilt and kicks you in the face with its abrasive, speedy and a very stop start flavour of grindcore.

This can be attributed to by the death metal influences that are very evident in the song writing and soundscape for that matter. It does tend to go from warp speed, straight down to slower, heavier riffs, which gives it that variation in tempo I so crave. It’s different and it definitely caught my attention straight from the get go. It’s a fun record to listen to, but it is also very taxing in terms of pushing your psyche to its very limit as you’re taken on a journey of musical destruction.

For the most part, it’s just fucking weird man, but in a groovy kind of way, where you’re not quite sure what to expect next. It has that unpredictability to it that makes it dangerous. The message of the record is definitely self evident and powerful for that matter, which gives it that passion factor.

This is a very weird and wonderful release by the French grinders, who have exceeded all my expectations with Flower Power. This record is definitely one of the most interesting listening experiences I have had to date, absolutely fantastic release.