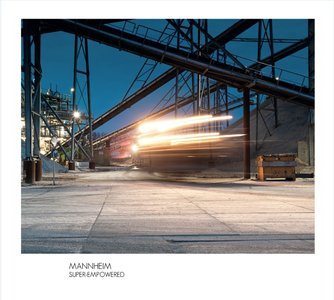 When I saw Dutch instrumental quartet Mannheim at Incubate Festival in Tilburg this September just gone I have to confess to being blown away by their combination of sludgy groove, mathy playfulness and free jazz power. It’s rare you see a band these days that don’t quite sound like anyone you’ve ever heard before. Zu are the most obvious comparison point here, but Mannheim sound more like a companion band than a band on the same path, which is some consolation to everyone who (rightly) thinks that it’s far too long since Zu last made a record.

On record Mannheim lack a little of the rawness that helped them capture my attention live, but only a little. The droning introduction to ‘Beast’ is no preparation for the devastating barrage that follows. There are quieter moments on this record, but mostly Super-Empowered darts from one huge slab of noise to another. Otto Kokke (also of Dead Neanderthals) is responsible for much of the truly manic that’s to be found here. His sax skronk isn’t a million miles away from some of the wonderfully atonal playing of Jørgen Munkeby on Shining albums like In the Kingdom of Kitsch You Will Be a Monster, Grindstone and Blackjazz (i.e. all their ‘metal’ albums bar that new one where they just try to sound like NIN for an entire record).

What separates Mannheim from a band like Shining, however, is that they are less interested in avant-garde statements of extremity and more interested in the primality of rock music. There’s a hefty dose of Shellac in the mix here. At points the bass sounds less like it is being played and more like it’s being hurled at the listener from the opposite side of the room. The math rock element of Mannheim’s sound is very much there, but it’s apparent in manner the band switch between modes of noise making than in an abundance of guitar led time signature wizardry.

The likes of ‘Watcher’ and ‘Predator’, probably the two best songs on the record, meld everything Mannheim do best into irresistible tunes. This is music that’s serious fun as well as seriously loud. Any fan of noisy rock music, preferably one who is also partial to a bit of experimentation, owes it to themselves to check this record out. When you’ve heard it start petitioning to get Mannheim to the UK as soon as possible. What a beast of a band.