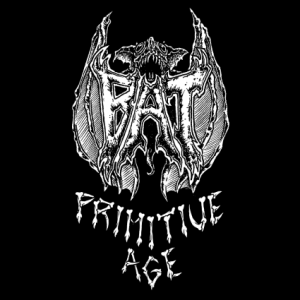 Out now through Tankcrimes Records (cassette) and Bandcamp (free download)

Like so many other teenagers, I grew up on both punk and metal. BAT – Primitive Age is a blended marriage of the genres that will almost immediately take some of us back to a time when skateboarding, going to shows, and hanging out were priority activities. This 5-song EP is like taking a surf board time machine to an age where jobs and bills and money didn’t matter. Not juvenile in composition though, Primitive Age is hard-hitting and insanely tough.

The first track ‘BAT’ will have you headbanging almost without realizing that the music has already tapped the veins. It’s catchy, diverting, and chocked full of first wave black metal vocal stylings that are catchy and stout. ‘Rule of the Beast’ is without a doubt one of the standout tracks on the record. It’s sexy, quick, and would without a doubt make Lemmy one proud daddy. It’s an agreeable party anthem that fills the head with images of old classic cars racing down the freeway in a sea of heavy exhaust. You can almost see back seats full of big-breasted women with huge blonde hair laughing and pounding beer along side dudes clad in leather and studs.

‘Primitive Age’ is the kind of track you’ll find yourself tapping your fingers to hours after the record has made its first go around. Raw and powerful, it’s a beast that young kids will flip over and old schoolers will approve of. It almost makes you wish this band were around in the early 80’s at the start of it all but it’s refreshing that their pumping out this kind of heaviness today, keeping that flame alive.

BAT is a band for fans of Motörhead, Discharge, and Venom. This is a powerhouse of a band that blend together as musicians just as well as the genres of this record does. Comprised of members Ryan Waste (Municipal Waste, Volture) on bass and vocals, Volture guitarist Nick Poulous on guitars, and former D.R.I. drummer Felix Griffin on drums. Out now on Tankcrimes Records, you can purchase this rock hard release on tape or on digital format.