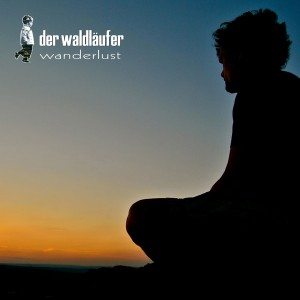 If you don't know who he is, Der Waldläufer is an independent artist from Kassel, Germany, who started producing his music in 2010 when he self-released the debut album Completely Near & Far Away. Those of you that had the occasion to listen to it should have noticed the ability that the artist has to bring you far away with his music that exhorts you to take the most relaxing and peaceful journey you can imagine. As Der Waldläufer says, his music “is always influenced by the dialogue between nature & technique”. Think about it and I'm sure that you cannot disagree. Just press play and in a bunch of second you are elsewhere and the nature will display the most gorgeous scenario. The peaceful journey of Completely Near & Far Away continues with the second album of the German musician titled Wanderlust.

Wanderlust is a beautiful album with a slow pace and a sense of vast spaces and light with electronic beats here and there that give a bit of rhythm to the overall atmosphere. 'En Route' is just an example of what I'm saying. The sound is more or less the same through all the 13 songs but here the electronic touch pushes the boundaries of ambient music to create something different. 'Eclipse Illumina' follows the same path of 'En Route' with a deep sound as intro that gently will lead you into the beauty of the ocean till you'll get lost in it. I particularly like the central part of this track. The nature and space that Der Waldläufer loves so much are here, perfectly blended and transformed into evocative notes.

The mesmerizing soundscapes of Wanderlust evolve song by song because each time they take the shape you want; they  could recall a bright sunrise or a red-tone sunset, or the view of the rain through your window. 'Innercircle', 'Sleepover', 'Naranja Nubis', just to mention some song titles, are all example of the evocative power that Wanderlust has. The shape that those songs possess it's up to you.

'Flores' is one of my favorite track from Wanderlust because I feel in it a sort of nostalgia or melancholia and therefore is to me deeper than the other songs. Wanderlust is a great album where the lack of variation is the only weak point, if it can be considered really a weakness, and for this reason I really like the acoustic elements that the artist introduced, as something artificial in the beautiful and immaculate nature that the Der Waldläufer's ethereal atmospheres evoke.

I cannot say when is the right moment to listen to this album but every time you feel the need of a slow paced emotional journey, Wanderlust is there for you.