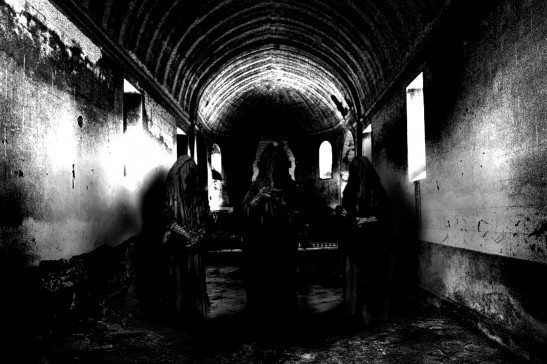 Abyssal are not well-known for their eagerness to give interviews, and so I count myself as extremely lucky to ask some questions to the band on the heels of their excellent release Novit enim Dominus qui sunt eius (reviewed here).

(((o))): It really sounds as though you’ve grown a lot in the time between Denoument  and Novit enim Dominus qui sunt eius. While both albums are indicative of your band’s signature style, I would say that Novit enim Dominus qui sunt eius elevates the sounds explored in Denoument in a much more mature way. Do you think this is just a natural progression from having worked together for longer or do you attribute this growth to anything else specific?

Abyssal: I would note that Novit enim Dominus qui sunt eius was a conscious decision for the mood of the music to adopt a darker and more extreme tone, however I feel that its air of maturity in comparison to its predecessor is more of a commentary on Denouement's immaturity as a release. Denouement was for all intents and purposes a demo which collected several years' worth of material together into one session. Novit enim Dominus qui sunt eius is much more focused, as all the tracks are specifically engineered to be part of a whole.

(((o))): Novit enim Dominus qui sunt eius definitely feels like a cohesive album in that each track feels like a movement in a larger piece. Was this album written song-to-song or was there a desire from the beginning to create something more like one long form work?

Abyssal: It is always half and half. The flow of the album must take precedence of course, but a good album is made of coherent and distinguishable tracks. Your analogy regarding movements as part of a larger piece is probably quite close to the point, as the hope is the album is well balanced enough to not exhaust a listener attempting to listen through it, while individual tracks remain interesting enough to be listened to on their own if need be.

(((o))): Your sound is described as black/death/doom, and you’re not the first band to require so many different adjectives/genres in describing a complex, multifaceted sound. I feel like metal sub-genres used to be created at a much more frequent pace, but that now we seem to have the old, “traditional” styles of metal and use these as reference points for new music that often seems difficult to describe. Do you feel like “black/death/doom” is a clear enough identifier? I’ve heard the term “occult metal” to describe bands with similarly broad influences. Does this phrase speak to you in any sort of meaningful way?

Abyssal: Genre labels are always just descriptive terms which hopefully convey some form of meaning between people. There are always alternative paths to describe similar sounds. Abyssal have been described as everything from "Post-Death Metal" to "Atmospheric Blackened Death". I personally have no preferences to what the music is described as, and black/death/doom certainly seems sensible enough.

I would however wish to avoid the term "occult" metal, as this says nothing about the actual sound of a band. It is particularly irrelevant for us as Abyssal have no occult lyrical content.

(((o))): Along the same line of questioning, do you feel that ultimately the label or genre comes last and can even get in the way of simply creating music that you find personally important?

Abyssal: There are undoubtedly some bands who have indelibly tethered themselves to a rigid genre definition and will likely never create music beyond its limits (Cannibal Corpse for instance). However on the flipside there are artists who seem to take joy in completely re-writing the rule book (Ulver springs to mind).

Ultimately it comes down to the personnel; I can see musical merit in both side of the coin. Abyssal lies somewhere in the middle.

(((o))): You have been, seemingly willfully, reserved in terms of giving much information to the public concerning who is behind the music you make. How important is anonymity and presentation in how it relates to your music and the experience of the listener (or the experience of yourself)?

Abyssal: The release of the first album omitted names and contact details from the sleeve notes; there was no conscious decision to deceive the public or indeed remain anonymous. However almost instantly the topic of discussion regarding Abyssal seemed to gravitate towards the identities of the musicians. This became somewhat of a frustration, as the music should be the main concern of the listener, not the banal names of the composers. As such, the anonymity remained intact going forward - a self fulfilling prophecy you might say.

(((o))): While you have spoken in previous interviews about the lack of “catchy riffs” in your music, I would almost argue that there is a groove at the heart of your music that helps anchor the complexity of it in a way that makes it more memorable and in many ways a more enjoyable listen than some other bands working in a similar style. Is this something that you would agree with, or is it possible that I’m insane to find what I would even call hooks in your music?

Abyssal: There is certainly at least a structure in there, more so that truly freeform music. I would suppose in this case that the catchiness of an artist is in the eye of the beholder. If a listener finds Abyssal to be catchy then I am not going to tell them they are wrong.

(((o))): What is the general musical background of the band? I hear touchstones of not only several different styles of metal, but even jazz and classical music. Do any members of Abyssal have formal training in music of any genre or are you all self-taught?

Abyssal: There is no formal classical training behind Abyssal's music. There are a great deal of influences that come from outside metal as you have astutely observed. The atonal compositions of Krzysztof Penderecki are a huge component in there, as is dark ambient music, jazz noir etc.

(((o))): What lyrical themes inform your music? Do the lyrics in fact inform the music or is the music generally composed first? What does the title of Novim enim Dominus qui sunt eius, which roughly translates to “For the Lord knoweth them that are His” and originates from the time of the Crusades, mean to you and how does it relate specifically to the themes at work in these songs and the music itself?

Abyssal: The title of the album doesn’t specifically define any constant message that underpins the disc, however it is generally fitting and indicative of the range of ideas covered; most generally the futility of human endeavours and their inevitable decay and degradation.

The context in which the words were most famously spoken does originate from the Albegensian Crusade as you pointed out, however this time period is not necessarily relevant to the music or the concepts covered.

(((o))): While a dark, bleak atmosphere is clearly prevalent in your music, I feel that there are very triumphant passages as well. This creates a feeling of tension and release which I think sets your band apart. Is this a conscious decision or simply a result of the feel of particular pieces? How much of your music do you feel is writing-based or arrangement-based and how much of it do you feel comes from a more organic, even improvisational process?

Abyssal: This is a very accurate observation, and it is most definitely a conscious decision when writing. Many tracks on the album build up to melodic crescendos in order to instill a sense of changing mood, and a release of the tension as you suggest. The most noticeable would be on tracks such as ‘A Sheath of Deceit’ or ‘The Last King’.

In terms of writing style, it must be said that much of the arrangements are fairly rigidly organised in advance and fine tuned iteratively. However, there is some room for improvisation on some of the lead melodies that cut in here and there. 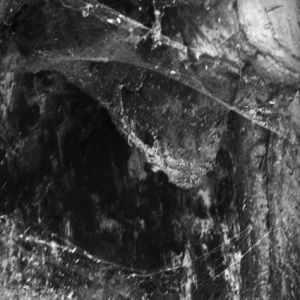 (((o))): How important is the visual element of your music? I feel that your album covers so accurately capture the sound of each album. Do you design your own album art, and is this an important aspect to your identity as a band?

Abyssal: To date, almost all of the artwork has been produced by a Lithuanian photographer named Kristina Gentvainyte. Her art is generally quite varied, but consistently dark, mysterious and poignant. Her photography for each of the layouts was handpicked by the band in order to fit the mood of the disc in question.

In general, I find that a solid and fitting layout of album artwork is incredibly powerful when accompanying music. It can add dimensions to the listening experience that would otherwise be unexplored.

(((o))): Do you have plans for any upcoming tour dates in support of Novit enim Dominus qui sunt eius? What is the best way for fans to support you, i.e.: where can they buy your albums or see you live?

Abyssal: Currently, the band is not a live entity. This is due to other commitments, and the ongoing writing process for the third album. Near the end of this year, we may see Abyssal performing live, but until then, the best way to support the band is through the Bandcamp site. Both albums are available for free download, with complete artwork layouts. Our newly pressed double LP of Novit enim Dominus qui sunt eius is also now available (through  Iron Bonehead Productions).